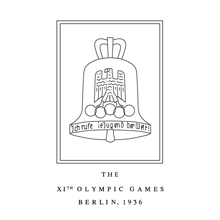 A total of 3963 athletes from 49 countries participated in Berlin 1936 Summer Olympics. They competed in 129 events.

Lithuanian athletes did not participate in Berlin 1936 Summer Olympics. However, Pranas Lubinas (Frank Lubin) became an Olympic champion as a member of the USA basketball team. He later represented the Lithuanian national team and became the European Champion in 1939. It was his decisive shot that brought the Lithuanians victory in their match with the Latvian team in Kaunas.

Basketball was introduced into the Olympic Games programme. Field handball and canoeing also made their first debut.

The Berlin Games are best remembered for Adolf Hitler’s failed attempt to use them to prove his theories of Aryan racial superiority. However, the most popular hero of the Games was the African-American Jesse Owens, who won four gold medals in the 100 m, 200 m, 4 x 100 m relay, and long jump.

The Berlin Olympics were the first to be broadcast on television.

These Games saw the introduction of the torch relay – a lit torch was carried from Olympia to the site of the Games.

These were the last Games before World War II.