The Lithuanian National Olympic Committee (LNOC) is an autonomous non-profit public organization that belongs to the global Olympic Movement.

The LNOC conducts its activities in accordance to the Constitution and legislation of the Republic of Lithuania, the Olympic Charter, the World Anti-Doping Code, the decisions of the International Olympic Committee (IOC), and the LNOC regulations.

The LNOC must preserve its autonomy and resist any pressure, including political, religious, and economic, which could prevent it from adhering to the principles of the Olympic Charter.

The LNOC delegates athletes for representing Lithuania at the Olympic Games and other Olympic events – the European Games, the Youth Olympic Games and Olympic Festivals. It also provides financial support for athletes and funds the activities of sports federations, gives Olympic scholarships to athletes, conducts programmes for raising the qualifications of sports and sports medicine specialists, and encourages the development of sports science and medicine.

The LNOC actively implements IOC’s programmes and agenda – supports and conducts Olympic education projects, promotes gender equality and fair play in sport, develops sports for everyone, promotes the Olympic Movement and records its history, takes care of prominent people who have contributed a lot to the Olympic Movement.

In accordance to the Olympic Charter, the LNOC membership includes all the national federations who have become members of international federations and whose sports or disciplines disciplines are included in the Olympic Games programme, persons contributing to the development of sport and Olympism and other entities defined in the LNOC’s regulations.

The main governing bodies of the LNOC are the General Assembly, the Executive Committee, the President, and the Revision Commission. 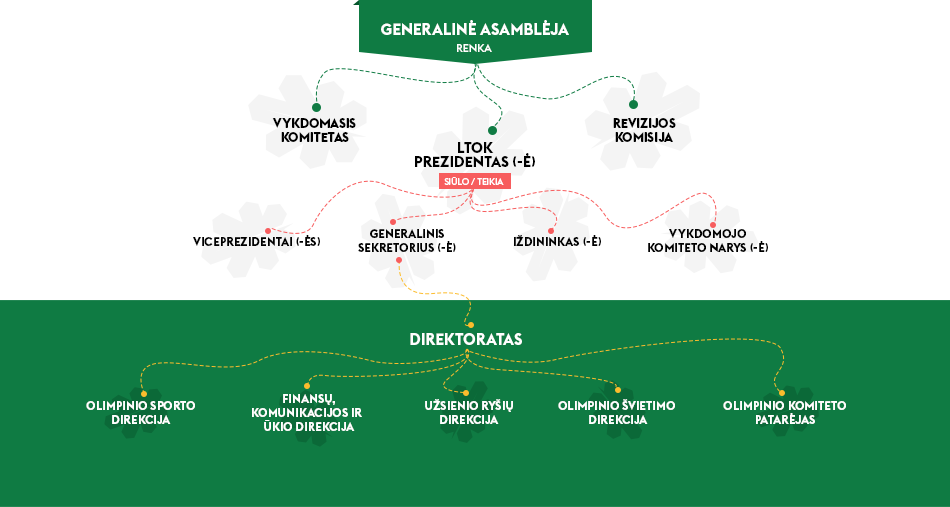 During the election session of the General Assembly, the LNOC President and members of the Executive Committee and the Revision Committee are elected. Election sessions are held every four years.

Extraordinary General Assembly sessions may be held if demanded by no less then a third of the LNOC’s members, the Executive Committee or the Revision Committee.

The Executive Committee manages the routine matters of the LNOC activities, is responsible for the activities of the LNOC’s directorate and fund management, upon suggestion of the President appoints and dismisses the LNOC directorate’s Director General, approves the LNOC directorate’s internal structure and all activity-related internal rules of procedure, establishes commissions, funds, companies, branches, and agencies, supervises the adherence to the requirements set out in the Olympic Charter, and carries out other functions entrusted to it by assemblies and according to regulations.

All the members of the LNOC Executive Committee are elected by the General Assembly.

Olympic champion and member of the International Olympic Committee Daina Gudzinevičiūtė has been the LNOC President since 2012.  The LNOC General Secretary – Valentinas Paketūras. The LNOC administration consists of Olympic sports department, Olympic education department, Foreign relations department, and Economic department with a total of 16 employees.

The LNOC’s activities are funded by UAB Olifėja (the LNOC owns 51% of Olifėja’s shares), the International Olympic Committee, sponsors and partners, and the LNOC’s subsidiary organization the Lithuanian Olympic Fund.

At least once a year the use of funds and income is audited by the LNOC Revision Commission and an independent audit company.

* To act in the name of peace, to promote and develop sports ethics, to fight against doping and to responsibly address environmental problems.

* To promote the main principles of Olympism country-wide, to strive for including these principles in physical education and sports programmes of schools and universities, and to take part in establishing Olympic education institutions.

* To ensure the adherence to the Olympic Charter in the Republic of Lithuania.

* To encourage the development of sport.

* To help prepare sports specialists by organizing training courses which would promote the main principles of Olympism.

* To fight against any form of discrimination and violence in sport, as well as the use of any substances and methods prohibited by the IOC and International Federations (IF).

* To harmoniously cooperate and maintain relationships with relevant governmental and non-governmental institutions, to actively participate in preparing all programs of development of sport.

* Together with Lithuanian sports federations, unions, associations, and other institutions, to take care of processes of athletes’ selection and preparation for the Olympic Games and other competitions supervised by the IOC.

* To publish and distribute sports-related and informational literature and periodicals.

* To protect the interests of athletes, coaches, and other persons contributing to the Olympic Movement.

* To participate in the IOC’s Olympic Solidarity programs and to further economic activities for funding LNOC programs and Olympic teams.

* To form and prepare delegations for the Olympic Games and regional, continental, or global multi-sport competitions that are supervised by the International Olympic Committee, and to lead these delegations.

* To take care of the delegation members’ equipment, travel, and accommodation matters.

4F company launched an initiative that each of us can take part in: all profits for special "LTeam #AšPadedu" T-shirts will go towards Vilnius university hospital "Santaros klinikos" and the fight with COVID-19.
#foto

On 12-13 March, the first session of the LNOC’s and Olympic Solidarity sports management course for advanced learners took place in Vilnius.
#foto

LTeam athletes on how to fight the spread of COVID-19 by staying at home.
#foto