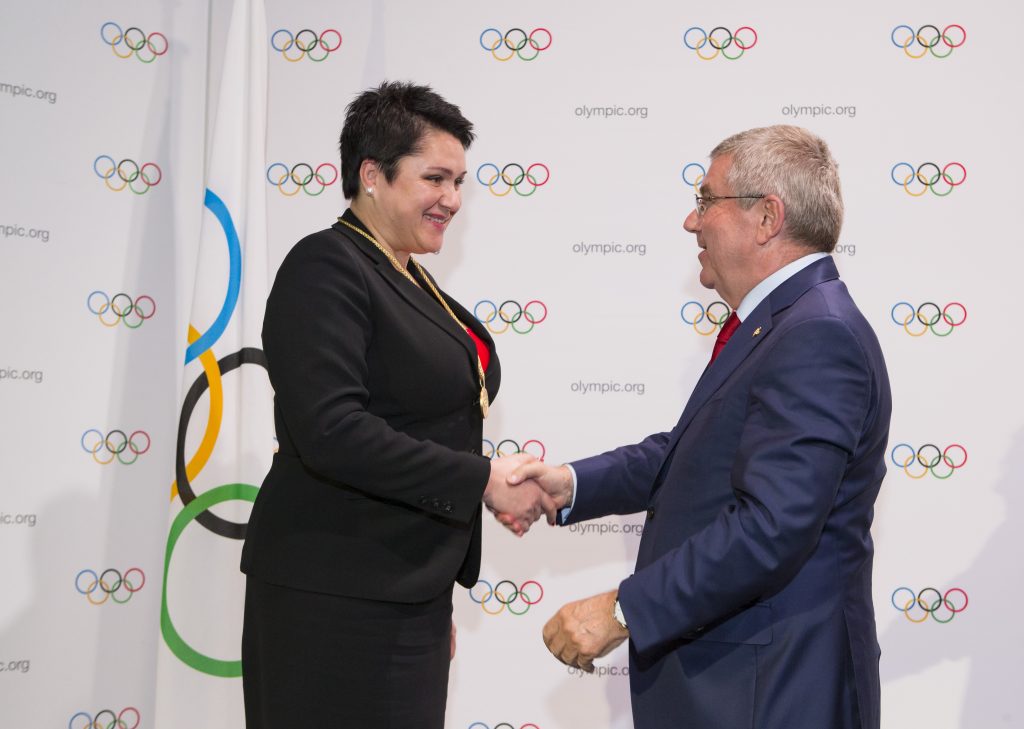 Since 2012 the Lithuanian National Olympic Committee has been led by the Olympic champion Daina Gudzinevičiūtė. In 2016 and in 2020 she was re-elected to this position.

The shooter who had participated in 5 Olympic Games started her career at the LNOC while still actively involved in sports. After winning the gold medal at the 2000 Summer Olympics in Sydney, she became a member of the LNOC General Assembly. Later Gudzinevičiūtė was elected as the Chair of the LNOC Athletes Commission and in 2004 she became a member of the LNOC Executive Committee. In 2012, the General Assembly elected her as the LNOC President. Thus Gudzinevičiūtė replaced Artūras Poviliūnas, who had been leading the Lithuanian National Olympic Committee since its restoration in 1988.

In 2013, Gudzinevičiūtė was elected to become a member of the Executive Committee of the European Olympic Committees Association.

In 2018 in Buenos Aires, the LNOC President was elected a member of the International Olympic Committee (IOC). She became the first Lithuanian IOC member.

In 2021, she was elected Vice-President of the European Olympic Committees (EOC).

Daina Gudzinevičiūtė was born on December 23, 1965, in Vilnius.

Winner of the 2009 World Cup in San Marino

Since 2000 – member of the LNOC General Assembly

Since 2004 – member of the LNOC Executive Committee

Since 2021 – Vice-President of the European Olympic Committees (EOC)

Gun of Distinction by the Ministry of the Interior (2000)

IOC Trophy “Sport and the Fight Against Doping”

On major victories and twists and turns of career

On beginning the athletic career: “My brother Sigitas was keen on shooting. He was the one who brought me to the “Dinamo” shooting range. Coach Vytautas Puzeras made me carry a rifle around for a couple of months, taught me how to hold it and how to take aim. It wasn’t easy to cope with a gun that was longer than me. I was teased a lot for it, but I did not give up and waited impatiently for an opportunity to shoot. When I hit my first clay pigeons I was very excited and surprised: did I really do it all by myself? Apparently, I did, and without any help. A lot of credit has to be given to my coach Puzeras for me becoming a shooter and reaching an adequate lever of mastership. He really knows how to spark children’s interest in this not particularly popular type of sport. In fact, I dreamed of horse riding, but my mother forbade it for fear of me falling.

Following a double triumph in the 1988 European Championships: “I was entrusted the task of defending the team’s honor for the first time, and, what is more, it was a very important competition. No wonder my legs and arms were shaking when I started my performance.

On her emotions a day after the victory at the Sydney 2000 Summer Olympics: “I still can’t believe that I am an Olympic champion. Everyone is cheering and kissing me, and bringing me flowers. I feel a bit torn apart, as so many people and journalists want to talk to me. On one hand, this huge attention is pleasant, but on the other – it is a bit intimidating. It was probably quieter in the shooting range.”

On ending her athletic career in 2012: “I abandoned shooting the day I was elected the President of the LNOC. You simply can’t sit on two chairs, you will end up falling in between. In my opinion, it is an impossible task to continue both careers.”

From her self-introduction during the LNOC President elections in 2012: “I have a lot of ideas, energy, and enthusiasm, and I believe that these are the qualities that a team leader and the LNOC President truly needs to have.  I believe that a multi-faceted approach is a valuable thing, therefore I suggest different people for my team. This new team will possess a perfect balance of experience, education, enthusiasm, and new ideas. The composition of this team was constantly altered in accordance to your expectations. My team is open and transparent, and without any “grey cardinals” that my opponents like to talk about. These are not cosmetic, but real changes. I am sure that the LNOC President should be actively involved both in solving very practical issues of athletes and coaches and in improving the overall situation of sport”.

On the importance of gender equality after receiving the IOC Women and Sport Award in 2018: “It has been proved that the environments where the balance of men and women is achieved are much more productive. When working together, the both genders complement each other very well, instead of impeding or taking over each other’s positions. Even in the Lithuanian Children Games the teams of preschoolers are made up of equal numbers of boys and girls. We seek to achieve the same balance in the future Games and the next European Youth Olympic Festival. Gender equality should also be achieved in the leading positions. At the moment there are five women in the LNOC Executive Committee”.

On her being elected a Member of the IOC in 2018: “It is an immense appreciation of our joint effort. By “us” I mean all those who participate in mass LNOC’s events, programmes of Olympic Solidarity, and various training courses for athletes, coaches, and sports administrators. Since my election as the LNOC President in 2012, we have made huge progress. Results surely prove that it is not some vain boasting. In some areas the IOC considers us an example to other countries. The IOC also hugely appreciates and supports our educational projects, the Olympic Day, and our exceptional funding system that ensures our autonomy and helps us accomplish a lot of useful goals for the benefit of not only the Olympic Movement, but for the whole country’s sport system as well. I do not think of this huge appreciation as of being my own. It is the fruit of labor of our whole sports community, our Olympic family and, our LNOC team.

On her being elected Vice-President of the European Olympic Committees in 2021: “The trust demonstrated by the Heads of other European National Olympic Committees is a great appreciation not only for me but also for Lithuania. We have seen once again that we are important players in the international arena of sport politics. I am greatly honored to be the first woman occupying this position. Together with the team, we are prepared to work for the benefit of the Olympic movement and European athletes”.