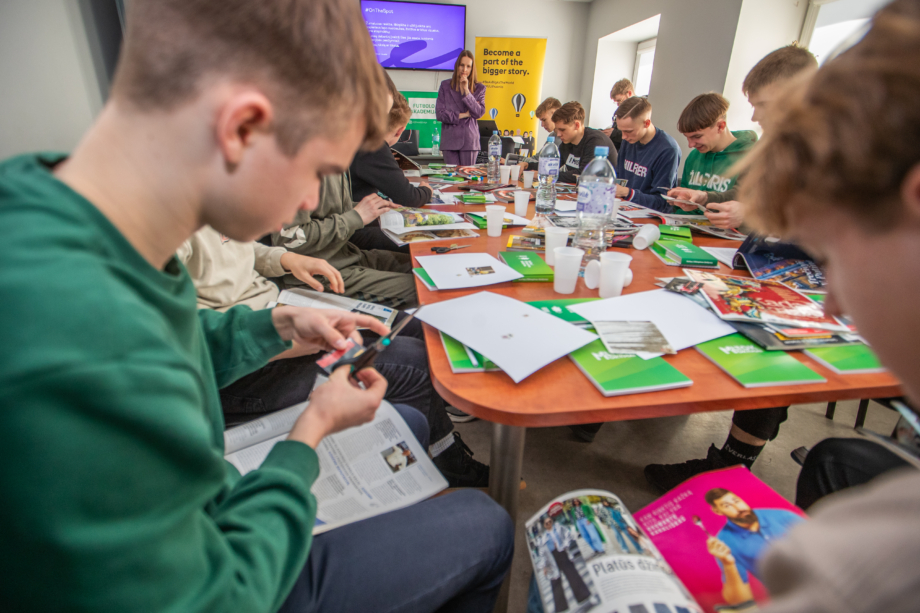 However critical some educators might be of Generation Z, young people who play sport ‒ from teenagers to twenty-somethings ‒ are curious, inquisitive and very receptive to knowledge. This was confirmed by the instructors and the participants of the recently concluded training organised by the National Olympic Committee of Lithuania (LNOC) in cooperation with the Western Union Foundation Lithuania meant for this age group.

The training was aimed at promoting youth leadership. Professional instructors, who had worked with athletes many times, would share the day: one instructor taught how to express personal leadership in a smart and practical way through social networks and other means of publicity, while the other one ‒ a coach and psychologist ‒ taught how to be a leader not only in sports but also in personal life.

Having started with Kaunas, in April the instructors also taught in Panevėžys, Kėdainiai, Garliava, Klaipėda, Palanga, Molėtai and Ukmergė. Each time, they would work in groups of a dozen to twenty people, using games, practical tasks and sharing their experience. This is the only way to achieve the best results, by speaking in a fairly personal way and not to large audiences.

Is it easy to incite today’s young people’s interest in something, to persuade them to be open to some theoretical knowledge?

Alfredas Kaniava, the Head of the Klaipėda Vladas Knašius Basketball School and coach, has no doubt: yes, it is, you only have to find a form of learning that appeals to them, and once you have them hooked, it is easy to offer them even more knowledge, to direct them to the desired way.

“I hear from colleagues ‒ coaches and educators ‒ who divide children into generations, that the current Generation Z has little interest in anything. I have a different opinion on this. Yes, perhaps there are many more temptations and innovations that are important to them today than the older generations used to have. However, children’s thirst for knowledge and interest is, I would say, even greater than that of the previous generations. When, by using the latest technologies, you attract a child, roughly speaking, from the street, when you introduce them to an interesting sport, an activity, a career opportunity, they become passionate about it. And then you can continue developing their personality, directing them towards the area they have a gift for. This training was namely about that. It showed the children and their coaches what the future of sport, its management or administration is going to be like,” Alfredas Kaniava said, adding that it was during this training that the children realised that they sometimes behave fairly irresponsibly in the digital space. But this happens when there is a lack of specific knowledge.

After the seminar, the coach invited all eleven participants to tea ‒ he wanted to hear first-hand how they had benefited that day. “They already had something to say about personal branding, values, how to build your reputation, how to avoid damaging oneself through ignorance, how to attract followers. And they used the word “respectable’ ‒ having received targeted knowledge on how to manage social networks, they already knew that their behaviour in the online space, the information they publish there, is not always respectable. They understood how much, what, in what format to share information, and how this can enhance their image in the future,” said the coach.

Miglė Ivanauskienė, Deputy Director of the Ukmergė Sports Centre for Education, expressed her delight that after the training, many of the young athletes aged 16-18 years old acknowledged that they had become even more reassured of their choice to become coaches in the future. The training was attended by the representatives of 20 different sports ‒ basketball, judo, kickboxing and dance. All of them are serious about their careers, so they were attentive of every word during the training and enjoyed the benefits.

“The students enjoyed the training of the motivated and motivating instructors, whose energy left no one indifferent. Interesting tasks and ways of presenting theoretical knowledge left no place for boredom,” said Migle Ivanauskienė.

One of the instructors ‒ psychologist, certified skills trainer, coaching expert Vega Dikčienė ‒ was delighted about the young people she met in all the cities: “Most of them did not require any special effort in inciting their interest, they are naturally bright and interested in everything that seems important in life. They are athletes, result-oriented, goal-oriented, therefore the topic of personal efficiency was timely and relevant. The training was delivered through activities, experiences and examples. The first group provoked me by saying, “Don’t talk about others, tell us about yourself.” Therefore I conveyed the contents of the topic through my life journey. I am also a leader myself, the head of a training centre, I have always worked as a psychologist, and I am studying psychotherapy now.”

The instructor emphasised that the age of the participants in such trainings determines a lot ‒ seventeen- and eighteen-year-old students have a different feeling and appreciation of themselves and of the subjects they are taught, while the younger ones rather tend to be just listeners.

“We analysed if you can be a leader to others, to bring them together, to invite them to move in a certain direction, if you are not a leader yourself, if you yourself have no discipline. We talked about the need to start with oneself first. It is not an easy topic, but very interesting. The four hours would fly in a flash when using games, discussions and other activities. I would return from this training feeling uplifted. I would joke to my friends that I should not be the one to get the salary, but rather I should be the one to pay for the positive emotions, the “cleanliness” of the participants, their ingenuity ‒ no pretense, no pomposity. These young people are amazing,” said Vega Dikčienė in admiration of the future sports leaders.

The LNOC signed a sponsorship agreement with Western Union Lithuania in September last year. The objective of the cooperation is to help the young athletes to develop not only on the sports playground but also as individuals and to introduce them to second career oportunities.