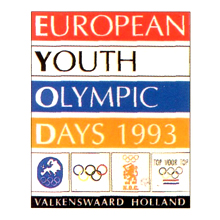 Lithuania in the Olympic Days

The Lithuanian athletes did not manage to win medals during their debut in the European Youth Summer Olympic Days. Our country was represented by 18 athletes – 12 basketball players and 6 cyclists.

The basketball team, coached by Jonas Kazlauskas, included many players who later became famous and defended our country’s honor in top level competitions: Šarūnas Jasikevičius, Kęstutis Marčiulionis, Andrius Jurkūnas, Kęstutis Šeštokas, Arnas Kazlauskas, Liudas Rimkus, Žilvinas Žydelis, Marijus Kavoliukas, the bearer of the Lithuanian national flag during the opening ceremony Marius Janulis, Žydrūnas Urbonas, Saulius Raziulis, and Nerijus Karlikanovas. However, this time the talented players placed 6th and did not get a chance to climb on the victory podium. In 1994 the team became the champions of the FIBA Europe Under-18 Championship.

Out of 6 cyclists who competed in Valkenswaard, Vaidas Grabauskas placed the highest – he was 10th in team race.