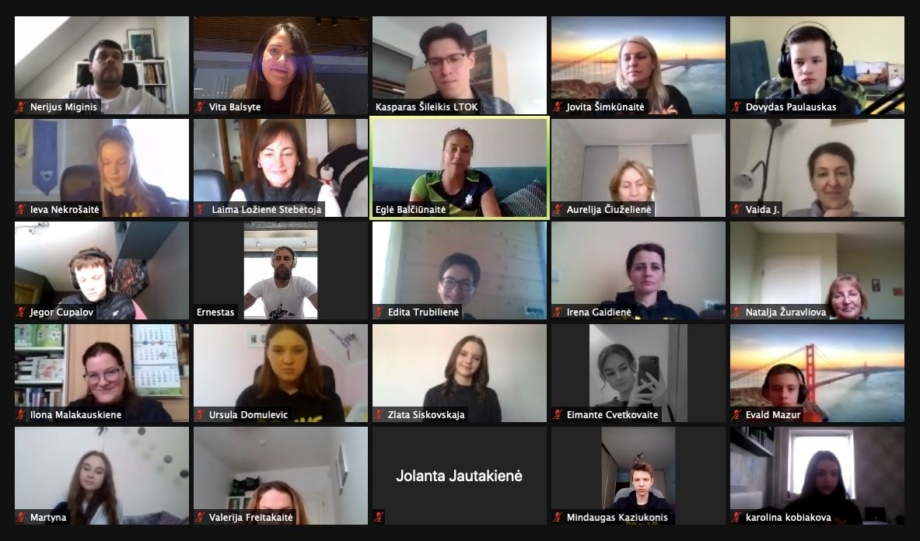 Sport is a tool to educate leadership and respect. This was the message that the famous guests of the closing event of the Dreams and Teams project shared with its participants. During the four seasons of the project organised by the British Council in Lithuania together with the National Olympic Committee of Lithuania (LNOC) united 320 students and 150 educators.

The aim of the project Dreams and Teams funded by the People to People programme is to develop students’ leadership, organizational, cooperation and teamwork skills through sport and physical activity. For three years, students from Klaipeda region actively participated in the activities, and were joined by the schools of Šalčininkai and Visaginas during the fourth season. 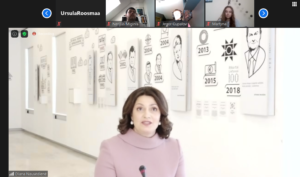 “Physical literacy, interpersonal communication, fair leadership are the skills needed to overcome the challenges of the pandemic. By joining this project through sport, you have experienced the power of change and have become the bearers of Olympic values.

If you find listening to and respecting another person’s opinion important, working effectively when combining the diversity of opinions in multicultural teams, if you feel respect for your teacher and gratitude to your mentor – you are the responsible leaders of the future, whom we are proud of,” said the First Lady Diana Nausėdienė at the event.

The Uniting and Inspiring Power of Sport

The British Ambassador to Lithuania Brian Olley, when congratulating the participants of the Dreams and Teams project, appreciated the openness and cooperation ‒ the skills which the students had been learning during the project ‒ between the participating Lithuanian-speaking, Russian-speaking  and Polish-speaking schools.

“Witnessing what has been done in four years, I can say that Dreams and Teams builds mutual respect and social cohesion between different communities. This initiative invites young people to get to know each other, to develop leadership skills and to change attitudes through healthy competition and building respect for each other’s languages and cultures,” said Brian Olley.

Director of the British Council’s Global Network Charley Walker also attended the event. His aim was to get acquainted with the projects carried out by the members of the network together with their partners. Of all the ongoing projects, the British Council in Lithuania has chosen the participants of the Dreams and Teams project to be introduced to Charley Walker.

“Nelson Mandela once famously said that sport has the power to change the world, unite and inspire. The organisers of the project Dreams and Teams, using the international sports language, speak with young people about respect, leadership and diversity. I hope we can all meet next year, when the British Council celebrates its 30th anniversary since its opening in Lithuania,” said Charley Walker.

“It is a great privilege for us to work with such partners as the British Council and to feel the support of the First Lady of Lithuania. The project Dreams and Teams creates a change in society. These young people are the future of Lithuania, growing together with Olympic values,” said Daina Gudzinevičiūtė, Olympic champion, LNOC President.

The participants of the project were actively involved in the activities of the closing event of the season. After first offering the guests to exercise together, they soon invited singer and TV presenter Vidas Bareikis for an interview. The students from Šalčininkai Zlata and Uršula asked the popular performer how a young person should find a beloved activity and what influence parents should have in their choice.

“I think parents should attentively listen to their children. How to find your own vocation? You need to try, otherwise you won’t know. I myself started with music, then I got hooked on acting, directing, and finally I returned to music. However, without searching I wouldn’t be where I am now. Therefore, do not be afraid to try,” said the performer.

Moreover, during the event the students had the opportunity to speak with Olympic runner Eglė Balčiūnaitė and candidate for Tokyo Paralympics paratriathlete Ernestas Česonis.

The athletes told the young leaders about their careers, hobbies, character qualities and skills which sport has helped them develop.

“Sport has taught me discipline and has strongly contributed to my overall development. It was only recently that I realised that as an athlete I could send a message to the society. I follow the saying: if you can help – help, if you can share ‒ share. I am happy if I can inspire not only to do sports, but also to achieve one’s goals, to clarify one’s values and priorities. I’ve learned a lot myself from interacting with people from other cultures. I very much appreciate the friendships that I have been lucky enough to find in Japan, Australia, South America, Switzerland,” said Lithuanian record holder Eglė Balčiūnaitė.

“It sometimes happens that you give it all at the competition, but you don’t succeed. In such cases, it is important that you raise your head and move on, never give up, whatever happens. Only recently have I noticed that many people align themselves with me. I feel a strong sense of responsibility. Athletes are rivals only during competitions, before and after we share our experience, laugh, and learn from each other. Life is movement. When you move, you break free,” shared Ernestas Česonis. 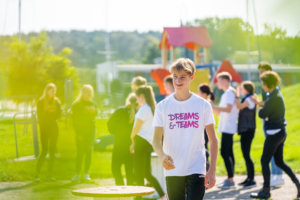 The fourth season of the project Dreams and Teams engaged a total of 26 schools from three Lithuanian cities. 78 educators and 150 young leaders.

At the beginning of the season, the students were divided into the teams consisting of young people and educators from different schools. The teams gained experience and knowledge during the project’s workshops. Later on, they chose a social subject area related to sports, such as gender equality, breaking stereotypes or the barriers posed by disability. Based on the experience and skills gained, the young leaders subsequently created and conducted physical activities for the younger students of their schools.

Students from Klaipėda implemented 30 remote activities aimed at younger students. The students who participated in the project developed different XXI century skills: interculturalism, learned about healthy lifestyle, sought to overcome stereotypes, shared experience, and learned to share ideas. The young leaders have transformed their activities and found a way to convey important topics remotely and, moreover, to ensure that students perform physically active tasks during their sessions.

The educators of Šalčininkai and Visaginas schools, who joined the initiative this season, took part in the training involving discussions on non-formal education, education through sport and mentoring. The students from these two cities participated in the seminars on leadership, emotional intelligence, the skills of the XXI century, got acquainted with other activities of Olympic education, and Klaipeda students who joined the training shared their experience.