The second season of the HeForShe project: equality in sport as a common goal 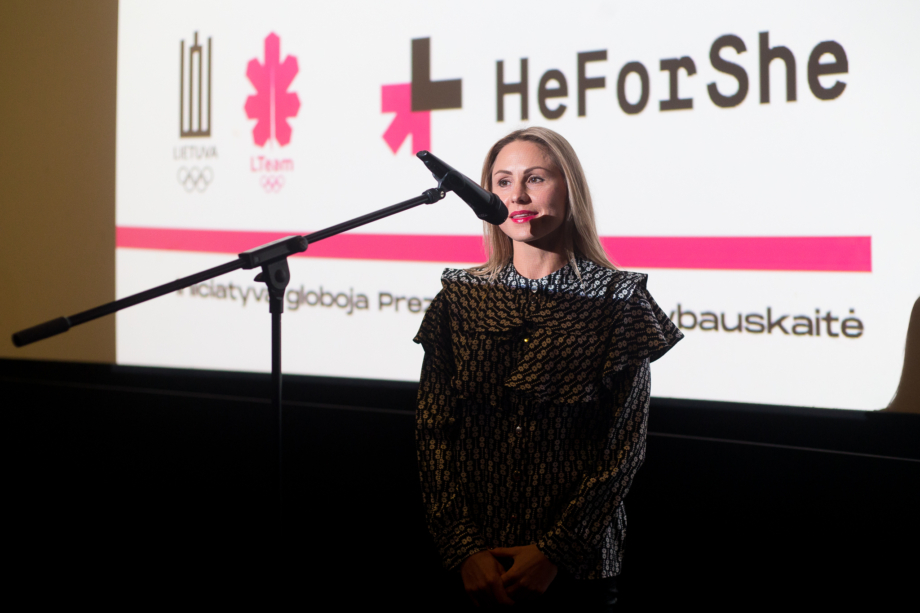 The second season of the HeForShe, a project promoting gender equality in sport, was presented during the Sports Film Festival. The National Olympic Committee of Lithuania (LNOC) joined the United Nations movement for gender equality a year ago and launched the HeForShe initiative in Lithuania. The project serves as an invitation to men to express their support for women and, together with them, actively aspire for equal gender opportunities, and be a united and visible driving force of change.

“In the first season of the project, we told five touching stories about men’s support for their wives, daughters, mothers, colleagues who are seeking for career heights in sport. We loudly reiterate that there is no such thing as male and female sports, that women can take up any position in sport and play any sport.

After all, I myself am a member of a so-called ‘male’ sport, and there was a time when women with rifles were not taken seriously.  I am glad that those old stereotypes are gradually disappearing and that attitudes are changing. I am even more pleased that we can contribute to this. I look forward to sharing the stories of the new season,” said LNOC President and Olympic champion Daina Gudzinevičiūtė.

Former President Dalia Grybauskaitė is the Patron of the initiative in Lithuania.

“I am happy that the second season of the project promoting equality in sport has already started. I chose a sport that used to be a male-only sport, but I feel very good and I am doing very well. That is why I want to support and encourage those girls who choose difficult sports. Don’t be afraid, we can do a lot,” said Laura Asadauskaitė-Zadneprovskienė, a pentathlete and the Tokyo Olympic vice-champion, who attended the opening ceremony.

The United Nations HeForShe project was launched in 2014 with a famous speech by the actress Emma Watson, pointing out that gender equality is a common concern for all. Since then, millions of men around the world have joined the project, including former US President Barack Obama.

In Lithuania, the LNOC has approached the project through the perspective of sport. During the opening ceremony, the audience had an exclusive opportunity to see the first story of the new season, which tells the story of Dalia and Artūras Katuliai, who are passionate hockey players and cofounders of the Ice Hockey Academy in Vilnius.

“My husband’s support is very important to me in my work. Such an equal partnership is very inspiring. It is important for me that we do not compete with each other, but encourage each other’s dreams. Artūras believed in me from the first step. Being an athlete, he is very ambitious and strives to win, but in our partnership, we support each other, we don’t compete,” said Dalia Katulė, who heads the Academy.

The Academy has a strong focus on promoting ice hockey among girls, and the number of girls is growing every year.

“Sport cannot be divided by gender, and hockey is no exception. It is a very fun game that can be played by girls, boys, women and men. I would say that girls need to be encouraged and motivated to play sports, they need to know from a young age that they can choose any sport they like,” said Artūras Katulis, a former player of the Lithuanian national team and now coach.

The guests at the launch of the new season of the project also watched the Sports Film Festival’s film “Girls Can’t Surf”, which tells the story of the surfers’ fight for equal rights.

New stories from the HeForShe project coming soon on LTOK.lt.