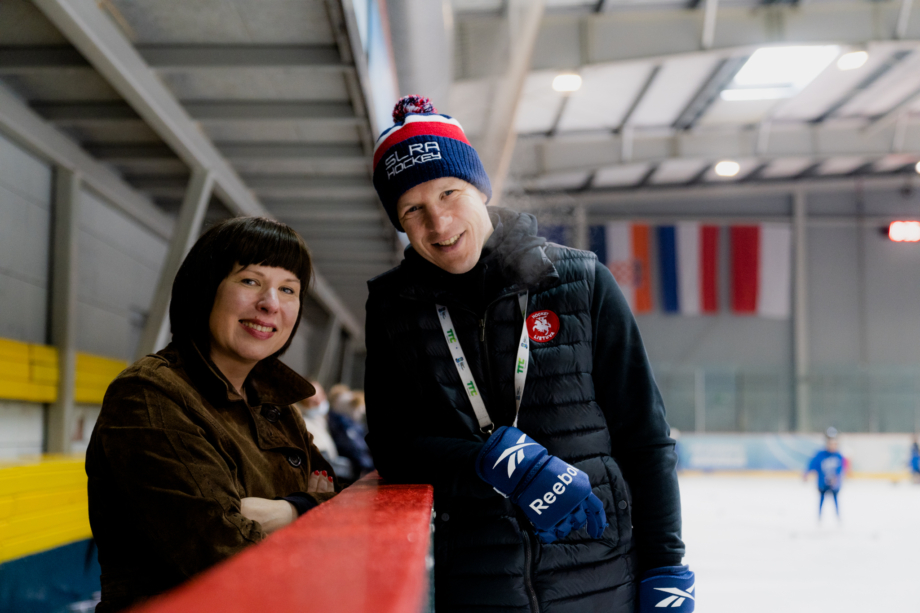 Driven by the desire to be with his family, to see his wife loving her job, he gave up the ice hockey player’s career when he was in his best form and had a few offers on the table for his further professional career. To lead the founded Sostinė Ice Hockey Academy, she swapped her comfort zone for an ice hole, as she calls it, and took the steering wheel of the spouse’s school.  Artūras and Dalia Katuliai is a tandem in love and work, according to them – the success of their couple is in their desire to be together, love, each other’s support and understanding.

Dalia Katulienė is the director of Sostinė ice hockey academy. The school founded in 2013 by her husband, a long-term member of the Lithuanian national team and the present chief coach of the academy Artūras Katulis during seven years of its existence gained fame as not only raising future members of the Lithuanian national team but also as the school that is not afraid of overcoming fixed patterns: the academy was the first school to have an ice hockey team of U-9 age group girls, while the young ice hockey players not only train together but also compete in the children competitions of Lithuania. True, it required much time and many efforts to turn it into reality – in the beginning, parents used to consider this sport as not suitable for girls and avoided enlisting their daughters to it or brought them to school only after their brothers tried the ice hockey stick first, while today they bring their girls feeling free of stereotypes.

The example of their own family dictated the rules without any artificial gender stereotypes at school – equal partnership and sacrifice for one another, when needed.

“Gender equality ideas come from our family, as Artūras and I are first of all friends, partners as well as parents sharing responsibility. I believe the same approach is felt in our academy. Whatever I do, I have never heard Artūras saying that it is not for women, that you can’t do it because you are a woman. We are equal,” Dalia is confident.

The story of the Katuliai family is the first part of the second season of the HeForShe campaign initiated by the National Olympic Committee of Lithuania (LNOC). The objective of this United Nations project is to invite men to show their solidarity with women and, together with them, actively aspire for equal gender opportunities and be a united and visible driving force of change.

Painful decision for the family’s sake

Artūras Katulis, who played in Finland and Latvia, matured for the decision to quit the professional sports career in 2013. At that time, his wife Dalia worked at SEB Arena, where she was in charge of sports marketing and did love her job. After discussing with the family his desire to spend more time with his family, Artūras decided the time had come to stay at home. In Lithuania, he soon decided to open the Sostinė ice hockey academy.

“Even now, sometimes I feel guilty and responsible for him quitting his career, because I knew that at the time he decided to quit professional sports, he was in a fantastic form, was a very good player, had two very good offers as a player, he could stay in professional sports for a few years. His mates from the national team and coaches mentioned more than once that he could stay in professional sports for years (he is still playing in the national team). I know that from his side it was an enormous sacrifice for me, for our family,” says his wife. Nevertheless, according to her, that is how respect comes, because we choose a partner for family and assume responsibility for him or her.

“My ego stops existing, it’s ego of both, and I saw him turning from a player into a coach in the first year. It was very painful for him. He really went through hell, he had to change his routine, he wanted to play… Trauma, no contract, redundance is one thing, and when you are invited to play, and you decide not to…” points out Dalia speaking about the difficult decision made by her husband. 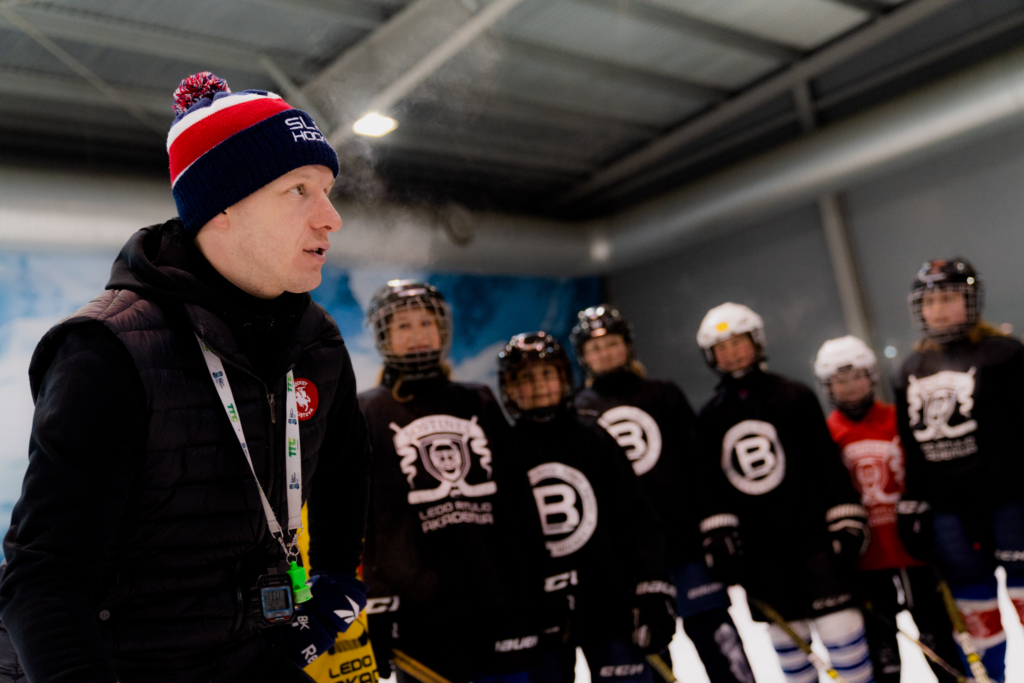 From comfort zone into a cold hole in the ice

According to her, Artūras finally made his decision – sooner or later he will have to end his professional career and it is better to turn this page of life now. The first training was attended by no more than ten kids, while today he has 170 young ice hockey players in the academy. Having started working alone, with the help of several young people, Artūras finally decided that the growing academy needs the contribution of his professional wife.

“Every year as I progressed with my work, a question naturally arose that maybe Dalia should quite the job she loves and join me? I started coaching, what I know best, and I enjoy, and she was entrusted with the rest – administrative work, marketing, advertising, what she knows from A to Z, where she is in her element. She agreed. I am very happy about that,” Artūras speaks about the decision to work together.

Dalia did not need to be talked into for this step, ice hockey has been accompanying their family from the moment they met – they met each other at an ice hockey event. Nevertheless, Dalia talks openly – from a comfort zone – her old job, where she had lots of opportunities, freedom for creation, decision-making power, financial stability – she put her hands into a freezing hole in the ice.

“But I was not afraid. It was a life project like our third child – it was deeply emotionally grounded decision. It was probably reasonable one at the same time, since I have a lot of experience and knowledge in sports projects. On the other hand, the academy was very young, growing, undergoing many fluctuations, financial instability, and for the family to have one business was a great challenge and risk,” supposes Dalia speaking about the beginning of the family project.

Feeling comfortable ‘one step below’

Until today, they are happy about the decision they made then. Artūras believes there is no more suitable person to run the academy than his wife.

“Very determined, always aiming to do things best. I don’t think I could do better,” says Artūras praising his wife.

He does not feel uncomfortable at all by his wife, in his words, being ‘one step above’ – holding the director’s position.

Of course, he admits that many men are still held back by stereotypes that women supposedly cannot do the job as good as men, as if women supposedly think differently. “Having wife, director like mine I can firmly say that it is wrong thinking – women can be not only equal with men, but even better. As I always say, everything depends on the amount of knowledge, attitude to one’s job, how knowledge is applied. Everyone is strong in a certain field. We also discuss sometimes that Dalia cannot train, while I would not be able to do marketing, I have no competence, it is a mere distribution of duties. In every field, women can work together with men and do everything better then men,” Artūras is convinced. Artūras sees massive workload of Dalia, that’s why he often takes over a lot of household chores: he does laundry, mows the lawn, tidies up their home, he even has agreed with their children that mum should not be disturbed.

They were lucky to meet each other

What is the key of success of tandem at home and at work? When asked, Artūras goes sentimental and even makes his wife sitting next and listening to the interview shed a tear: “You know, sometimes I ask myself this question. Even I am curious. And I don’t know. It is extremely difficult to answer this question because everything comes naturally. It is love, desire to be together, mutual understanding and not overstating anything. It is ability to adapt,” Artūras is convinced. According to him, Dalia is simply the most important person to him, to whom he is grateful for everything. Dalia also can say ‘thank you’ to her husband for many things – she thanks him for respect, understanding, huge trust in her, support in every step.

“I was simply lucky to meet the person, with whom I can be, first of all, myself as a personality, I feel huge support everywhere. I don’t know other ways to express my gratitude… I was simply lucky to have met Artūras. We both feel good together. Listening to each other, hearing each other – it’s a gift from God,” openly says Dalia.

True, she adds immediately that their life is not a romantic movie sprinkled with sugar.

“It is not everything surreally beautiful in our life, we are not perfect, we have our own interests and ambitions. We do face elementary challenges at home: we argue, laugh, cry, and sometimes have silent moments, because we have different opinions. I am hot-headed – I need to make decisions now and here, while Artūras makes a pause, which sometimes drives me crazy. Sometimes he lets me make decisions now and here and fail, and sometimes he holds me back. The longer we live together, the better we understand one another, and if we had more sharp edges in the past, now they are polished,” Dalia is sincere.

According to her, two strong personalities living together inevitably have to make compromises – it was difficult in the beginning, and eventually became more and more easy, because you simply want to stay together.

“He, being a sportsman, has certain rituals – repetition of certain things. In the morning, he sends me a message ‘good morning’, though we are in the same house, just in different rooms. Or when getting into a car – he also says, ‘good morning’ and gives me a kiss – it reminds us that we are a family, that we came together not for a joint project, but first of all we wanted to be together, we became a family, our kids were born,” points out Dalia.

She also reminds that many of us simply forget the simple truth in daily life – we have only one life and it may end at any moment.

“We have to live it to leave some legacy, to be remembered with a smile. Not to have a big house, beautiful car, but a project of which our children, grandchildren could be proud. And to achieve that you must be not afraid of challenges. My wish is not to be afraid of challenges, to take risks, to do what you want to do, rather than what you are expected to do by the others,” concludes Dalia. 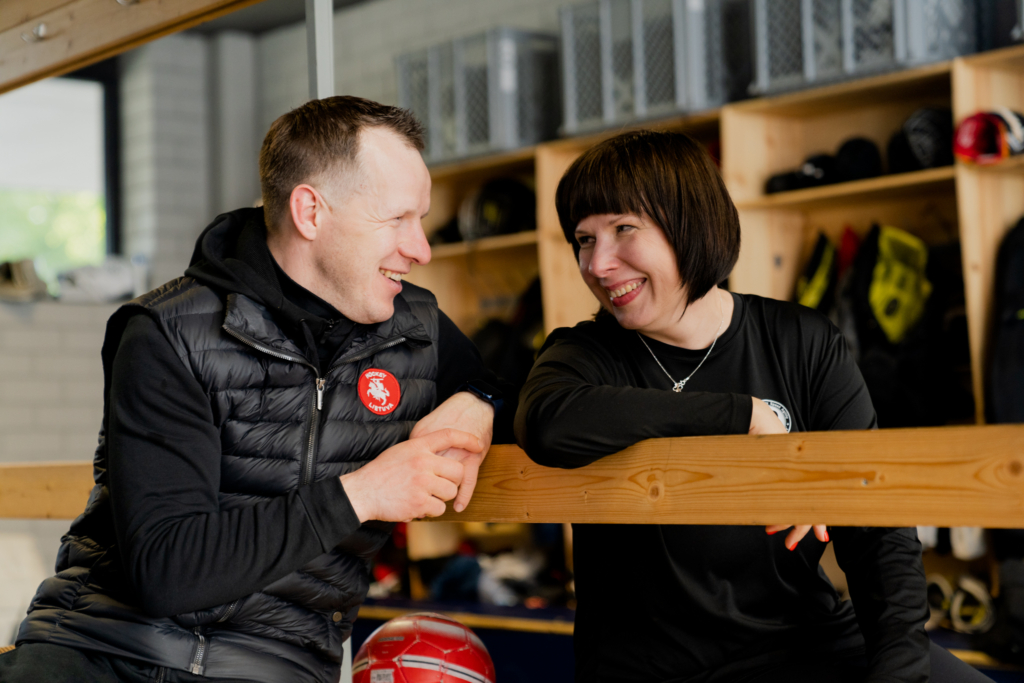