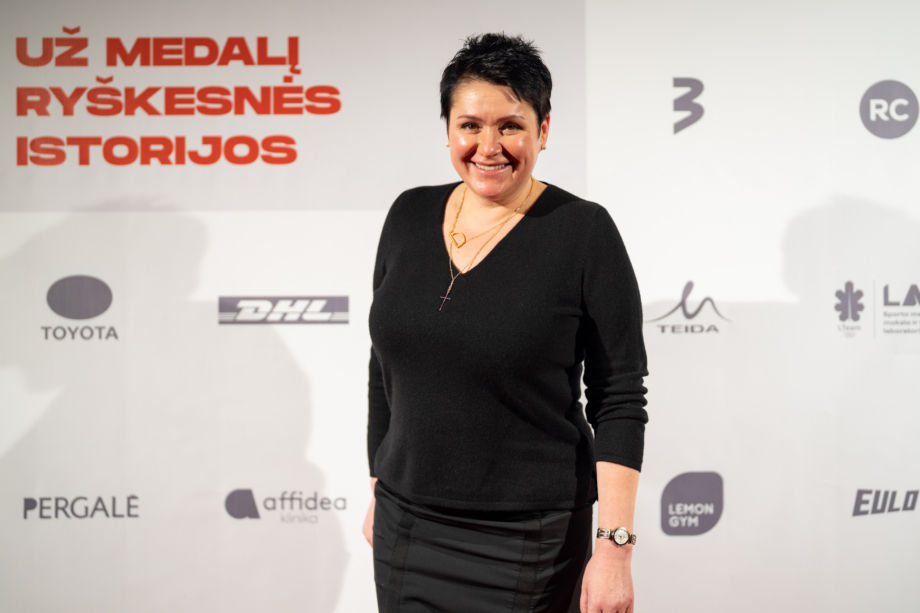 Sport is more than just exhausting physical training. Competitions are not just medals and victories. Moments of triumph often hide huge icebergs of hard work, and behind the heroes who seem to have incredible superpowers stand – first and foremost – ordinary, down-to-earth people. People who are afraid, who make mistakes and who get nervous, but who are also brave, persistent and ambitious – the ones who desperately want to win. The ones you want to root for. The ones we call athletes.

On 2-9 December, the Sports Film Festival invited viewers to get a close-up look at their daily lives and see what is often left behind the scenes. Film lovers were greeted in Vilnius and Kaunas with the slogan “Stories brighter than a medal”.

The event, which was organised for the seventh year by the National Olympic Committee of Lithuania (LNOC) and the Lithuanian Olympic Fund, returned to the screen this year considerably larger and stronger – the festival, which took place at Forum Cinemas all week, presented nine exclusive films, including six documentaries and three feature films.

This year, the festival organisers paid special attention to the programme content, which was put together by Edvinas Pukšta, who is probably Lithuania’s most well-known film critic and reviewer.

“These are not subject-specific films about any one sport, but rather – more on-point dramas that are provocative, inspiring, personal and eye-opening, where sport only helps to raise delicate humane, social and political dilemmas,” said Mr Pukšta at the beginning of the Sports Film Festival.

According to Pukšta, all the films included in the repertoire speak to human topics that are relevant to most, such as subtle discrimination, equal rights and humanity. The films open the curtains for the viewer by revealing what goes on behind the scenes after competitions, which we don’t see on the TV screen, examining the unbearable expectations that often overwhelm athletes, and drawing attention to real historical events. 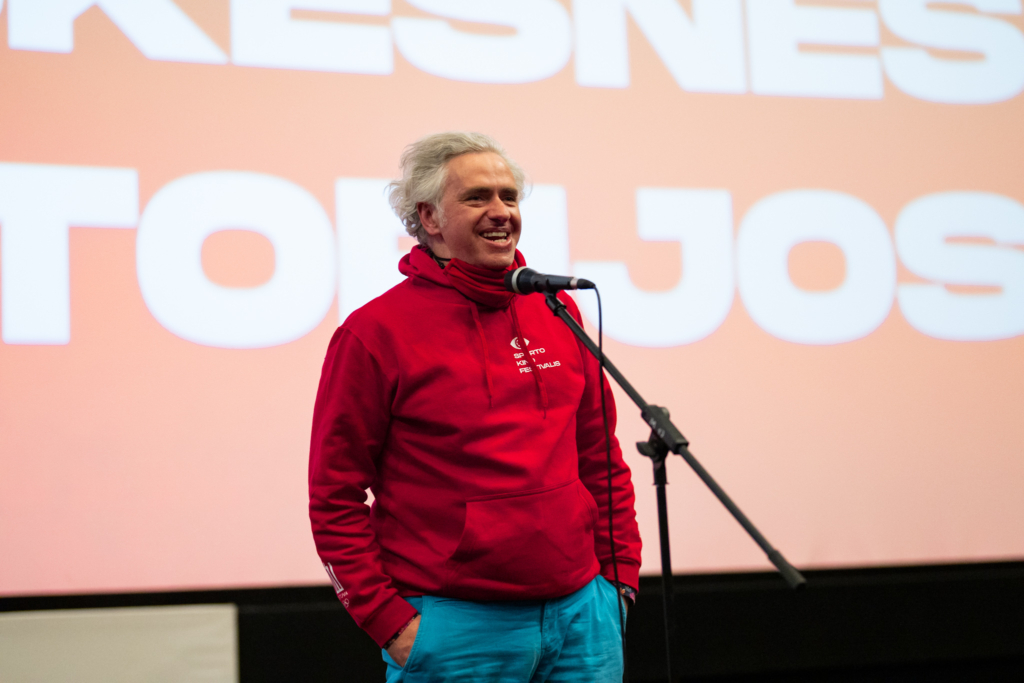 Keep Running, a Chinese documentary that tells about the incredible determination of children to train in the harshest weather conditions, when the thermometer drops to as much as 58 below, attracted the most audience interest. An Australian documentary about women surfers which breathes of freedom was equally popular – the film Girls Can’t Surf exposes the sensitive topic of gender equality in sports. Cinema lovers also appreciated Big Vs Small, which tells the story of an extreme sports enthusiast who rides monster waves in Portugal in summer, and then goes to Finland in winter to break… the freediving record. The invisible colours of women’s soccer were highlighted by The Squad #notheretodance.

Some of the films shown in Lithuania have already received a standing ovation at the world’s biggest film festivals: Captains of Za’atari won best Arab documentary film at the El Gouna Film Festival, Nadia, Butterfly was named Best Canadian Film at the Vancouver International Film Festival, and The Swimmer brought actor Omer Perelman Striks to the spotlight at the Jerusalem Film Festival. Meanwhile, director Elie Grappe’s Olga not only won critical acclaim at the festivals in Cannes, Hamburg and Brussels – the Swiss have selected this sensitive film about the story of a Ukrainian gymnast as their entry for the Best International Feature Film at the Academy Awards. 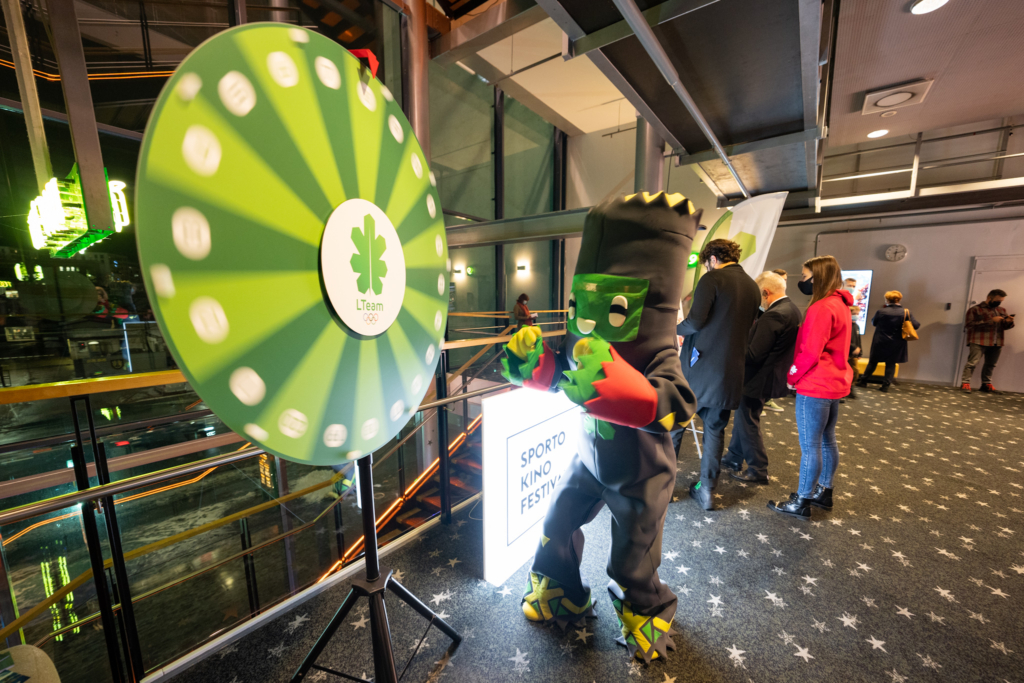 This film made waves in Lithuania as well – the premiere of Olga was shown at the opening of the Sports Film Festival, with the drama pulling in both well-known athletes and celebrities from the world of culture and entertainment. Olympians Diana Zagainova, Ričardas Nekriošius, Milda Valčiukaitė and Saulius Ritter were joined on the red carpet by familiar faces such as Janina Lapinskaitė and Algimantas Puipa, Valda Bičkutė, Gabija Ryškuvienė, brothers Kšištofas and Darjušas Lavrinovičius, Baiba Skurstenė-Serdiukė and her husband Mykolas Serdiukas, and Redita Dominaitytė.

“We are happy to see the topic of sports becoming more and more relevant in cinema every year – that more and more films are being made every year which reveal the other side of the coin, and give viewers a closer look at what is often left behind the scenes. With this year’s Sports Film Festival, we aimed to show the audience that every hero is first and foremost a human being,” said Daina Gudzinevičiūtė, Olympic champion and President of the LNOC, which organises the event.

According to Gudzinevičiūtė, sports are like life, where we often only see the victories and celebrate athletes’ achievements. However, for many an athlete, the road to triumph is long and hard, and full of different obstacles. This is why cinema can become a great tool for learning about sports, as well as for discovering new sports that we may have never thought about, appreciated, or known.

“The Sports Film Festival encourages people to look at sports from a different angle – to inspire, educate, teach and motivate. Sport is very diverse, and the festival viewers will no doubt be convinced of it themselves, since the programme has been selected so that everyone will find something to watch,” points out Ms Gudzinevičiūtė.

The festival plans to return with a new and even more colourful programme in 2022.