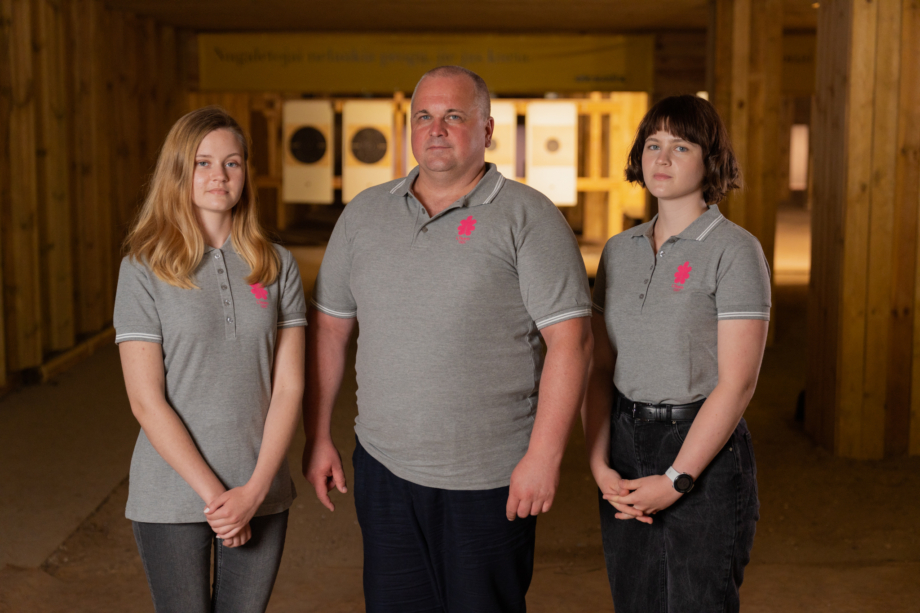 How do you raise daughters unconstrained by stereotypes? Robertas Rankelė, father of two daughters, Gabrielė and Greta, who have chosen to take up skeet shooting, knows the recipe. He and his wife let his daughters explore all the activities that interested them. He says that the phrase “girls don’t do that” has never been used in their family. On the contrary, they were always encouraged to follow the way of their choice, and were supported.

Back in 2012, Gabrielė, the elder daugther, expressed her idea to her dad Robertas that she would take on shooting. And he was not surprised.

“Both Dad and Mum agreed. If my sister and I showed initiative, our parents would always help us turn our ideas into a reality,” says Gabrielė.

And that’s exactly what happened that time. First they tested their accuracy at fairs and events where there were shooting ranges, and then, one summer, they started thinking about taking up shooting more seriously. Dad started looking for a place where first one daughter and then the other one could learn skeet shooting.

“Many times during festivals or fairs did I hear other peoples’ replicas about my daughters’ fondness of shooting. Little by little, I had to accept the fact that they were serious about shooting rather than wanted to just have fun. I was given the task of finding where to do it. So I sat and searched. Now I will not even remember who told me that there was a shooting range and told me about shooting instructors. That’s how we started,” Robertas recalls the very beginning.

Soon he had to take not only his elder girl but also the younger one to training exercises. It was a mere coincidence that the school needed to gather a team to attend a competition. That is how Greta became part of the team.

“There was an inter-school competition that required participants. I did pretty well at the competition, although I had exercised shooting probably only once before,” Greta says.

When she saw that she was doing well, she decided, encouraged by her coach and also following her sister’s example, that she should continue exercising skeet shooting.

Strong Support in the Family

There were victories and days when fortune would turn against them, but both sisters always felt strong support of their parents. Their dad Robertas’s contribution into making sure they could go to competitions was in general instrumental.

“At the beginning, you are nothing in this sport, you don’t get any funding, your parents pay for everything. Our parents used to finance all the competitions, which are not cheap. Sometimes we had to travel further and live somewhere for a long time when we were away. It was not cheap. My dad’s biggest contribution was into logistics, because he had to drive us everywhere, starting with the basic journey from home to the shooting range and back,” Gabrielė speaks about her dad’s contribution. 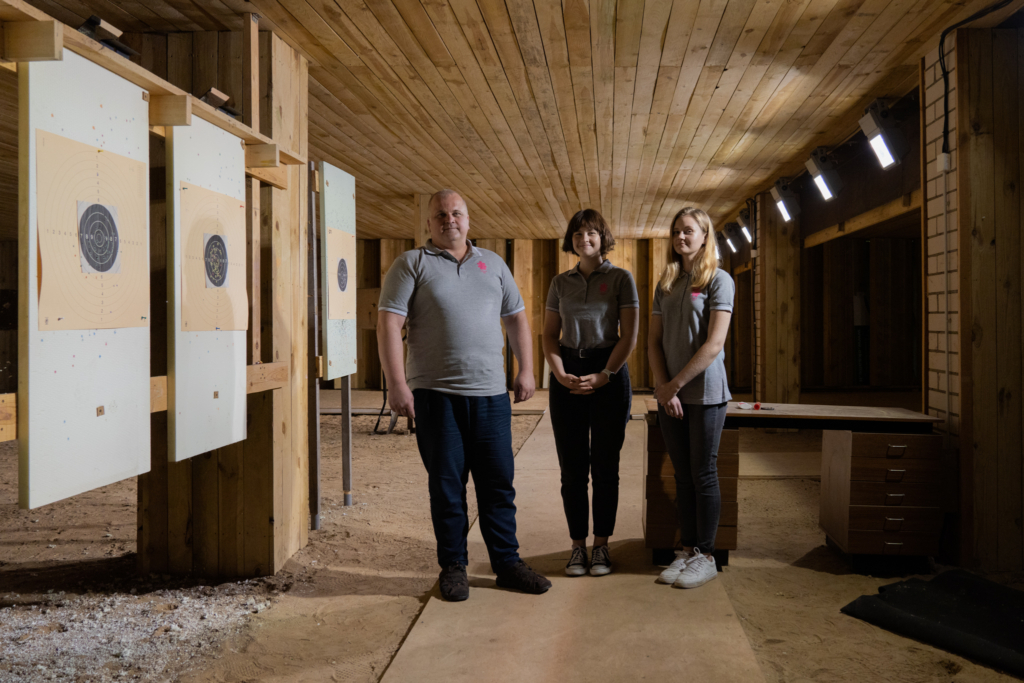 There were some competitions, she says, which could not have been reached by any public transport. People around them knew how big Robertas’ heart was and how much he cared for his daughters, therefore even the Lithuanian Shooting Sports Union would ask him to drive not only his daughters, but also the whole national team. And, of course, Robertas Rankelė would not hesitate to agree.

“First of all, he would take care of us. He said he didn’t care who else would be on the bus. I think that’s his biggest contribution,” says Gabrielė.

She remembers her dad sacrificing his summer holidays, taking days off work to take her and her sister where they needed to go ‒ he was not afraid to have to drive dozens of hours each way.

However, Robertas does not consider his contribution so important. “I’ve had to travel together many times, to help, to support, but I don’t think it is any special contribution. This is just normal. Many of my friends whose children play sports do the same. The most important thing was to find a place to shoot, get guns, equipment,” the man does not flatter himself excessively.

However, Greta says it was important for both her and her sister that their dad, having taken them to a competition, would stay with them: they would talk, the girls would feel his support. While Gabrielė adds that she felt not only her dad’s support, but also her mum’s.

“Our family is like one unit, I can’t imagine anything falling apart. It would be very unnatural, because we are all very united in the family,” she says.

Greta agrees with her sister that when stereotypes are so prevalent in society, the support of the family is crucial: “There are stereotypes in many sports that girls are not able of something, and that boxing and other similar sports are not feminine. It is very important that parents are supportive, encourage interest in these sports and don’t develop stereotypes themselves.”

Robertas makes no secret of the fact that he had often seen people being surprised about his girls practising shooting. He finds this kind of wonder strange. “Those who haven’t been exposed to it have quite strong stereotypes based on the belief that it is a semi-militaristic sport, it is something scary, it’s not something you can practice, especially if you are a girl. But that is the opinion of people who do not know what the sport is like, and cannot tell a pistol from a rifle. For some reason, it seems wrong to them,” he wonders.

Robertas has never instilled in his daughters the attitude that certain activities should not be practised by girls.

If a child wants to construct a nesting box ‒ go ahead. Moreover, Daddy cooks meals as well, it is not just Mummy’s job to toil in the kitchen. We never talked in the family about them had better abstaining from doing something only because they are girls,” says the man.

According to Robertas, stereotypes never existed in the family, and he gave his children complete freedom and constantly encouraged them to learn and explore. “I’ve heard a lot of talk about the most important thing for a girl being getting married. That is not what our family thinks. Knowledge, books ‒ they may be interesting, they may be dull, but certain things are a must to read. It’s just like at school. One also need the theatre, the cinema ‒ to put it short, one has to get to know the world. Children must not be prevented from developing; they tell us themselves what they want. It is all very simple, and perhaps the most important thing is to avoid interference, but rather help and support them instead,” says the man.

Gabrielė adds to her dad’s thoughts: she never thought about gender inequality or stereotypes when she was a child, because she felt that she was brought up just like a simple child, without gender bias.

“My dad raised us without emphasising our gender, and he would always instill a broad worldview in us, which means that I have to know how to cook a meal, how to sew clothes, how to patch socks, how to turn a screw. And if I ever need these things, I will not have to look for someone to come and do it. I believe these things start with such small steps that, when looking at your child, you do not think about them being of a certain gender,” Gabrielė says convincingly.

The girl reflects that maybe she and her sister had a way of showing their parents the desire for a diverse upbringing.

“I don’t know if a child can show that. I always wanted to do some constructing and repairs with my dad, I would always watch him do something, I would attend car exhibitions with him. He would take me with him and would never say it wasn’t female or that I wasn’t allowed,” says Gabrielė.

Greta subscirbes to this, saying that she feels and has always felt being able to do what she likes.

Robertas says that it was not only at home that his daughters tried everything they wanted. They used to attend all sorts of informal education activities: Oriental duelling, swimming, shooting, dancing.

“If we only take boys to karate, the girls won’t be able to defend themselves, they won’t learn posture. It’s a sport that teaches you to stand properly, to walk straight, to concentrate, to focus. If only girls learn dancing, they will have noone to dance with, while men will remain unable to move in dance. It is already very hard to find a dancing partner. If we close the door to one of the parties, there will be no balance left,” the man believes.

But stereotypes are still prevalent in our society. “I hear it every week when I talk to new people. Why? Because of narrow mindset. I don’t want to offend anyone, but I think it is the truth. Some people don’t allow their daughters to shoot, to study physics, others prevent them from the army, while others consider it perfectly normal because they see their daughters as individuals having their own desires,” says Gabrielė. 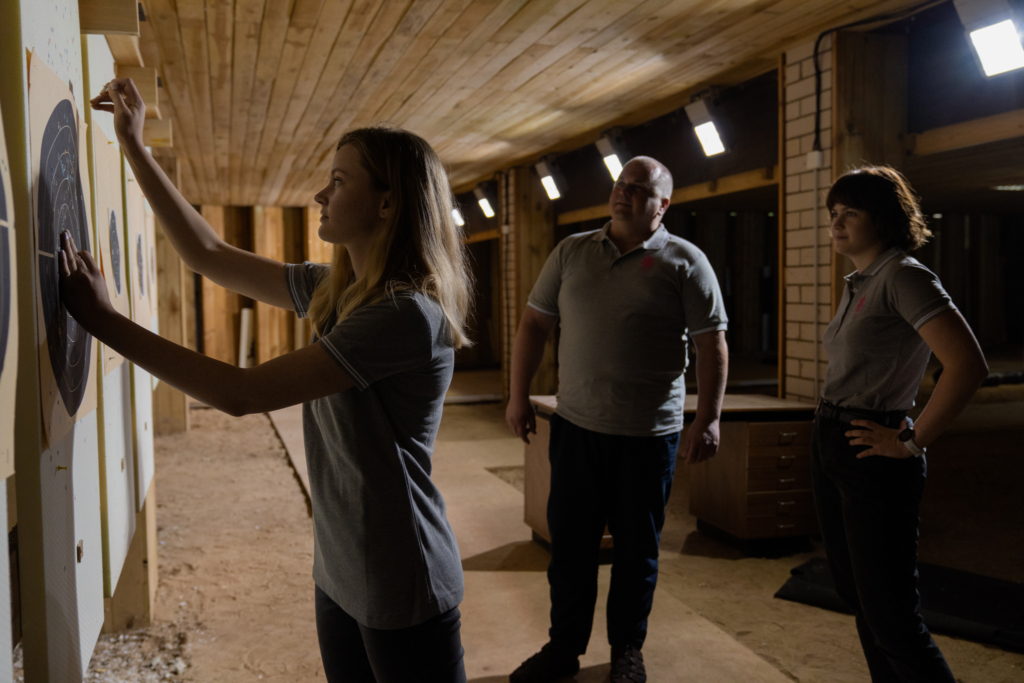 The Magic Bullet That Hits The Target

Gabrielė is happy to be a skeet shooter because she finds the activity magical: “I love shooting and I think that’s what matters most. It’s about putting together parts of the body into one whole to make all the organs and the mind work the way they should, and finally hit the target from a 25-metre distance. Maybe that’s the greatest magic, because I still don’t understand how a bullet hits the target if you do everything right, how such a little thing can fly 25 metres and hit the bullseye just because you do something right. I consider it to be the biggest magic,” Gabrielė wonders.

Greta seconds her sister and says that the biggest fun probably lies in the hitting target. “The most important thing is not to get a good score, but rather to feel that you did a good shot from the technical point of view, that you were fully committed, that you did your best. Sometimes you get a good score but you don’t feel good because you made mistakes that you could have avoided and as a result you failed to shoot as well as you could have,” Greta admits.

When Robertas watches his daughters shoot, this sport seems like 60 or 90 minutes of concentration, focus, calm.

“You remain alone in front of the target and you have to ideally repeat the same action 60 times. You have to have inner peace, you have to be at peace with yourself, you have to agree with yourself, and you yourself are your only and main competitor. And I think that peace of mind helps you in your studies and in life in general, because you have the skill of concentration and focus,” says the girls’ dad.

He believes that shooting developed even more qualities in his daughters.

“They have learnt independence. Since their childhood, they have been travelling, working, seeing other countries. They don’t always get to visit a lot, but there are also trips where they get to see more than just the shooting range and the hotel. It broadens the worldview. They see people, they meet others, talk to them. They have learnt planning, because there are many competitions, they have to go and make arrangements with the teachers, to plan their assignments and duties. And not casually, but in a way that everything is on schedule, so that they can match school and exercising,” Robertas says.

He feels his daughters’ gratitude through mutual relationship. “When I look at my daughters now, I thank my parents. When you are in your fifties, you realise that someone has instilled in you that stereotype-free attitude that you have been able to pass on to others,” concludes Robertas.