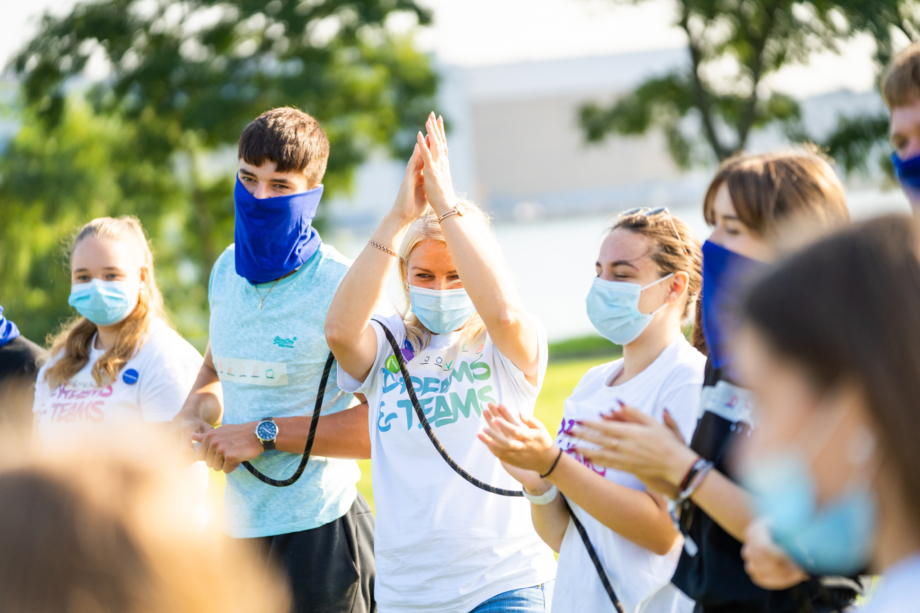 For three years, the students from different schools in the Klaipėda region have been developing their leadership, teamwork and cooperation skills via sports. Visaginas and Šalčininkai schools are going to join the students from the coastal region for the fourth season of the Dreams & Teams project.

Dreams & Teams is a unique project ongoing for a third year organised by the British Council in Lithuania together with the National Olympic Committee of Lithuania. The project seeks to develop, via sports activities, students’ leadership, organizational, cooperation and teamwork skills.

“The project Dreams & Teams is unique in that it also promotes cooperation between different schools. For the students, it provides an opportunity to expand their horizons and make new friends outside their school. Teachers also get actively engaged in the project. The knowledge gained during the training helps them contribute to the development of students’ leadership skills later on,“ said Ona Marija Vyšniauskaitė, Director of the British Council in Lithuania.

The organisers of the initiative estimate that over 1700 participants from the Klaipėda region have taken part in the project’s educational activities during the three seasons. At the beginning of the season, schoolchildren are divided into teams consisting of the students from different schools. This is not only an opportunity to expand one’s circle of friends but also to test oneself, to step out of one’s comfort zone.

The teams gain experience and knowledge during the project’s workshops. Later on, they choose a sport-related social subject area, such as gender equality, breaking stereotypes, overcoming disability. Based on the experience and skills gained, the young leaders subsequently create and conduct sports activities for the younger students of their schools.

Each season, teachers also participate in the long-term training provided in the course of the project, which involves joint training for the teachers and students and interactive sports activities for the students.

The success of the project encouraged the organisers to expand the scope of the initiative to other regions of the country. For the fourth season of the project, Visaginas and Šalčininkai schools will join the project Dreams & Teams.

“We have received an incredible amount of good feedback, and we are witnessing the change ourselves: the students who have been involved in the project for a number of years have become more daring, they do not fear challenges or to take an initiative. The community of project participants is growing and gaining strength, and the students themselves are becoming more active members of their schools and the urban community. We hope that in the future we will be able to cover even more regions of the country,” said LNOC President Daina Gudzinevičiūtė.

Every year, the participants of the project Dreams & Teams have the opportunity to meet and talk with an Olympian. This spring, the students remotely met the Olympic champion Daina Gudzinevičiūtė, and during the final stage of the project with students talked about leadership with the cyclist Gediminas Bagdonas. 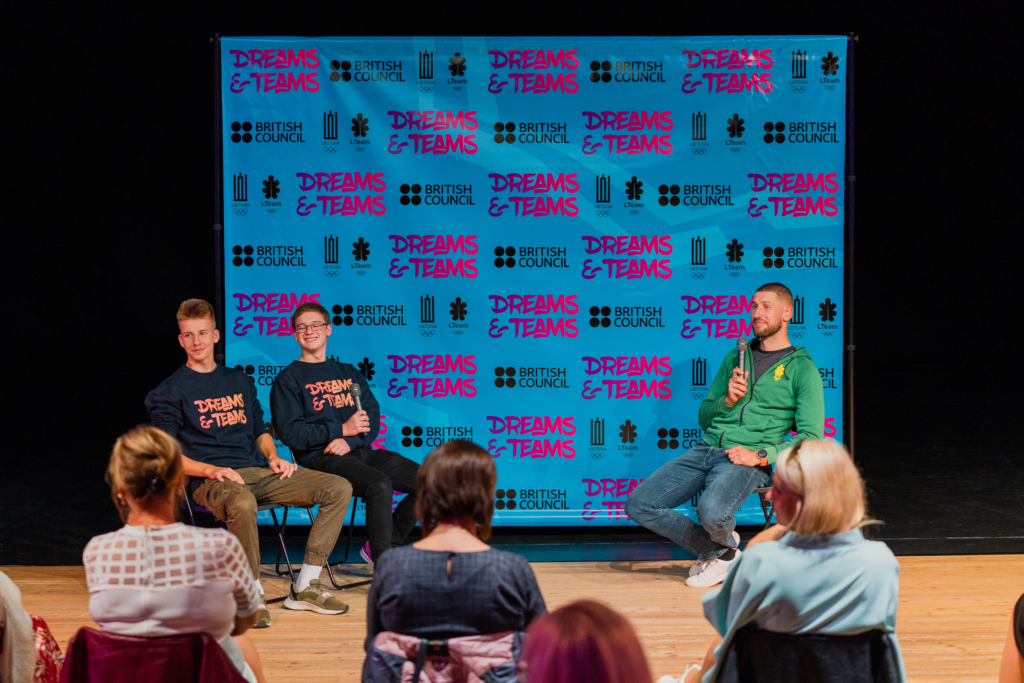 “A leader should set an example everywhere: both in sport and personal life. You have to be always geared up and spare no effort to win every competition. You must have a dream and pursue it without any distraction. Even having fallen down, a leader will rise, stand up and move forward. When preparing for a serious competition, you must cycle in rain, against the wind, in snow or even storms.

I like the saying: “If you are failing now, the day will come when you succeed.” Working in patience and building your stamina is the only way to advance towards your dream,” Mr. Bagdonas shared his thoughts on leadership qualities with the students.

The impact study of the project Dreams & Teams has shown that the form of activities and the format of the project itself (when a mixed group of both Lithuanian and Russian-speaking students and teachers participated in the activities) helped shape a different attitude towards the Olympic values of friendship, respect and improvement.

The objective for the teachers who participated in the project was to learn to give the students more autonomy, allow them to make mistakes and take the ownership of an activity. The impact studies have shown that in such a case, the students’ involvement, level of activity and motivation increased considerably.

“We must let them stumble and fall, and learn from their mistakes. This was the hardest thing for me. After all, up until then I had always done my best to make sure the kids succeed. I have also realised that all those years as a teacher, I used to be fairly patronizing when working with children, and, with the sole intention of helping them, I sometimes used to do some things instead of them myself. I feel I have undergone a transformation of mind,” said a teacher who participated in the training sharing his impressions.

The students have noticed that they have become more self-confident and daring to act, and have also developed the sense of independence. They have also become more respectful of their teachers.

“After we were given a chance to conduct classes for other students ourselves, I think we have started to understand the teachers’ work much better. It wasn’t easy to stand in front of the class trying to arouse the students’ interest, and to calm down the raging ones. Now I seem to empathise with the teachers much more when I understand better how difficult it is for them to conduct a lesson when students make noise. We worked in a team of five, while teachers are on their own during the lesson,” said one of the schoolgirls.

One of the results of the project is a changed approach towards competition. The teachers have noticed that reducing competition makes it easier to involve in class activities the students with different skills.

“We increasingly hear people saying that sport is a powerful tool of developing a more conscious society. Both international and our own experience shows that sport helps develop empathy, social responsibility, solve sore social problems and develop the Olympic values of respect, friendship and improvement. The Dreams & Teams have brought together a coastal community of socially responsible and active youth, which, I hope, will eventually expand, with the youth of the whole Lithuania joining it,” hopes Olympic champion Daina Gudzinevičiūtė.