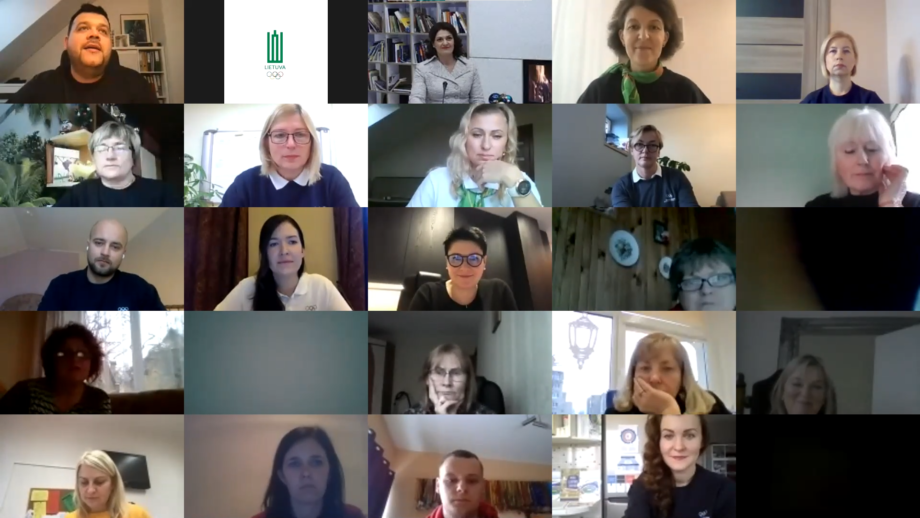 The Olympic Values Education Programme is being implemented in Lithuania for the third year. The aim of the programme, initiated by the International Olympic Committee (IOC) is to provide teachers with tools for innovative work with the children of all ages in the spirit of Olympic philosophy, values, symbols and engaging in physical activity.

The conference was attended and its participants were welcomed by the country’s first lady Diana Nausėdienė.

“The pandemic has shaken the whole world and has made us understand as clear as ever the importance of a healthy lifestyle and physical activity, how important it is to move properly and raise a physically active younger generation. I am extremely delighted to be a member of your community and to have this opportunity to welcome the teachers. You are developing the future of a healthy Lithuania,” said the first lady.

“I thank Mrs Diana for her sincere support which we can feel. This year is a special one, making us rethink what we consider as important. No economy will make sense without values, health or sport.

Sport and physical activity are powerful educational tools helping to inspire young people, develop their self-confidence and acquire social skills. I am delighted that every year more and more teachers get acquainted with this programme and join the Olympic movement,“ said Daina Gudzinevičiūtė, Olympic champion, member of the International Olympic Committee and President of the LNOC in her welcoming speech to the participants of the conference.

During the conference, Dr. James Mandigo, Provost at the University of Fraser Valley (Canada), made a presentation on the development of values and life skills through sport and physical activity, while the expert on educational programmes from Australia Ms. Heather MacDonald spoke about the power of the Olympic movement.

A discussion was held on “Developing Values Through Sport and Physical Activity”, during which the participants could listen to the opinions of Dr. Rolandas Zuoza, Head of the Sports Group at the Ministry of Education, Science and Sport and Chairman of the LNOC Olympic Education Commission, Ms. Laima Telksnienė, Deputy Director of Utena Krašuona Progymnasium, OVEP trainer in Lithuania, and Ms. Vita Balsytė, the LNOC Olympic Education Director.

The third part of the conference involved active sessions on such topics as values education at school, Olympic values integration in kindergartens, Olympic values as a tool for the institutional culture development, change management , in total seven sections for participants’ groups.

LNOC has been one of the first organisations in the world to translate the OVEP into the national language and, with the agreement of the IOC, to offer to the teachers of Lithuania the training consisting of several levels.

During three years, over 30 training sessions for teachers have been held in ten cities of Lithuania, which were attended by over 1000 educators.

All tasks and activities presented by the programme are based on five Educational themes of Olympism: Respect for Others, Fair Play, Joy of Effort, Balance Between Body, Will and Mind, and Pursuit of Excellence. These are universal common human values, and its nurturing and education is the task for every teacher, every citizen, every family.