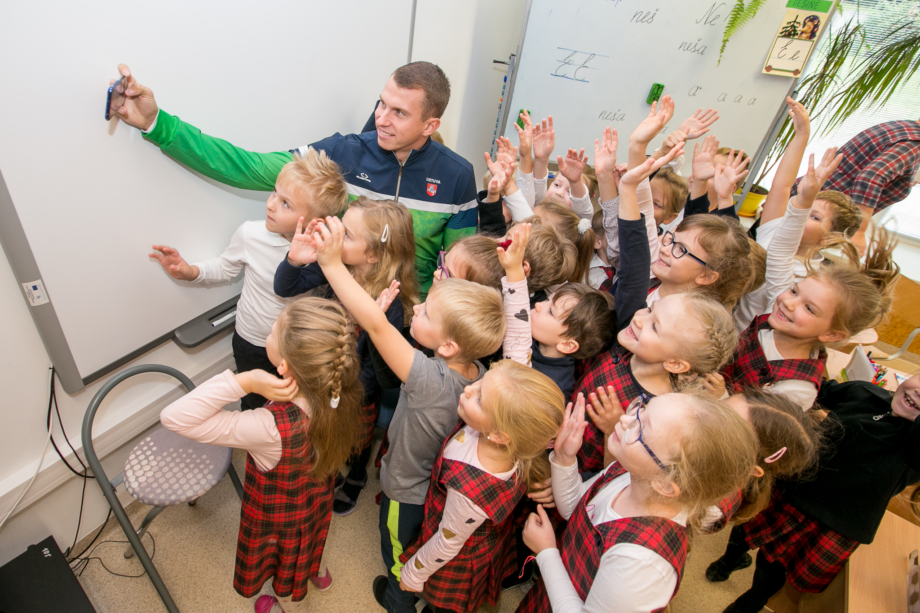 Today marks the start of the Olympic Month project for primary school pupils, which has already become a traditional project initiated by the Ministry of Education, Science and Sport, the Ministry of Health and the National Olympic Committee of Lithuania (LNOC). During the four weeks of the project, pupils will have the opportunity to get acquainted with four topics: physical activity, healthy eating habits, emotional health and cooperation. The project is organised under the patronage of First Lady of the country, Diana Nausėdienė.

“The Olympic Month project involves many Lithuanian children and introduces them to important topics from an early age. I am very pleased that so many teachers and parents understand the importance of the project and are eagerly joining it. Getting acquainted with the topics of emotional health, healthy eating habits, cooperation and maintaining physical activity and helping to realise its benefits as early as in primary school is very important for the development of strong personalities,” ‒ says Diana Nausėdienė.

Not only experts and specialists in their respective fields, but also the most prominent Lithuanian athletes ‒ members of the Lithuanian Olympic team (LTeam) ‒ will set an example and introduce the topics to children. School students will have the opportunity to participate in the exercises conducted by the Olympians and virtual meetings with them.

The first week of the project, which started on the 4th of October, invites children to get acquainted with the importance of physical activity. More than 30,000 primary school children were exercising the whole week with runner Eglė Balčiūnaitė, rower Dovydas Nemeravičius, runner Vaida Žūsinaitė, canoeist Ričardas Nekrošius and health and fitness trainer Simona Pajaujienė.

“This is the fourth year of the project. The project is meant not only for children, but also for parents and teachers, as they are the people who are best placed to motivate children to do sports and to take an interest in the topics that are important from an early age. We are also very pleased with our Olympic athletes who have willingly joined the project. It is of crucial importance for children to hear the individuals they see on TV and to have role models to follow,” said LNOC President Daina Gudzinevičiūtė.

The project will run throughout October and will not only involve experts, specialists and Olympians who will engage in activities with children, but also teachers, who have received all the tools from the organisers. The Olympic Month will engage children in activities both during classes and during breaks as well as at home with their parents.

This year, 1900 classes from all over Lithuania are taking part in the project Olympic Month.