Modern Pentathlon Coach Vilma Juchnevičiūtė Speaks About What It Means To Be The Only Girl In The Boys' Water Polo Team, the Breakthrough And the Most Important Lessons Given By the First Coach 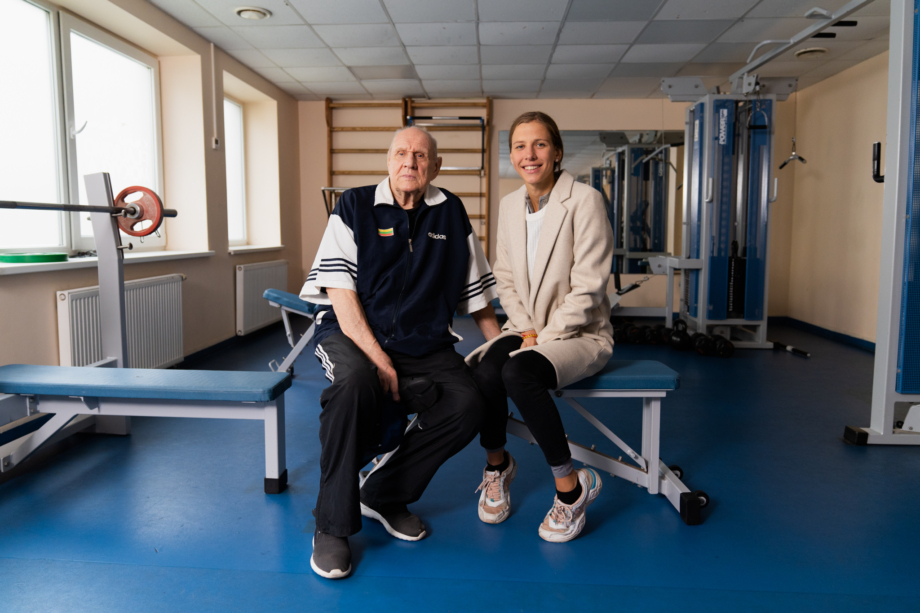 Kaunas swimming pool Dainava. It was here, many years ago, that the bond between Jonas Čirūnas, a water polo coach at the time, and Vilma Juchnevičiūtė, a little girl who was brought here by her mother to tame the water, began. Having accepted her into the team of his students, for many years Jonas had an equal player in the boys’ team with unstoppable tenacity and a desire to always be the leader, who later switched to another sport ‒ pentathlon. Today, Vilma herself is a children’s coach of modern pentathlon, and her work with children is guided by the approach and values instilled on her by Jonas Čirūnas.

The coach brings an album of his former pupil to his meeting with Vilma.

“Her whole life is here,” says Jonas Čirūnas as he presents her with a memento.

In fact, flipping through the album brings back many memories of the time when she was still being coached by Jonas Čirūnas. “We are here on a tank in the army. A friend, General Sergej Madalov ‒ then still an acquaintance who later became a friend ‒ invited us for a tour. Children are interested in the army and weapons. Here children are on a tank. The sea… The dolphinarium ‒ Vilma was the only one who was allowed to swim with the dolphins,” the girl’s former coach comments as he flips through the pages of the album.

She came to learn to swim, and got involved into water polo

Vilma was seven when the coach welcomed her among his students. Her mother brought her and her brother to the pool to learn swimming. As Vilma’s mother recalls, it was a cold winter with a snowstorm. Having entered the pool building with her children, the mother asked the receptionist if she could sign them up for swimming lessons. She told her that all the groups were full, but that she would still ask another coach. A few minutes later, Jonas Čirūnas came in and told her the good news ‒ he would accept the children into his group, however not for swimming lessons, but for water polo. The group consisted of only boys. This is how Vilma’s acquaintance with water sports began. A brave, active and innovative girl quickly became enthusiastic about the new activity.

“We came to learn swimming, but since the coach specialised in water polo, he taught us to swim, little by little, and later he introduced the ball to be trained with in the water, training sessions changed and we started to learn how to play water polo. I was the only girl, therefore I had to play with the boys. The coach never made a difference between a girl and a boy. He let me play with them. However, the boys regarded me differently, as a girl,” Vilma admits today.

But back then, it was her coach who encouraged her to keep going and to keep seeking for results, reminding her of how much she was capable of and letting her compete in competitions.

More Than A Water Polo Coach

Jonas Čirūnas did not restrict his team to only training in the swimming pool ‒ his students had the luxury of going with their coach not only to competitions and camps, but also on various excursions.

“It takes a calling to be a coach. You have to love the job. You can’t work carelessly. You have to be versatile: we used to go to the cinema, the theatre, the museum, we meet Pranas Majauskas at the Sports Museum. You have to go everywhere with the children, you can’t be lazy,” advises the coach.

He believes it is important to broaden childrens’ horizons. A wide circle of acquaintances helped Jonas organise something interesting.

“I knew a commander in the army, so I make a phone call, make arrangements, and an officer comes along and tells us about the army. The kids get interested. Vilma’s brother is now an officer. If you put something into children, they later return the same to you,” Čirūnas is convinced.

We went to numerous competitions and camps. The coach recalls that in one of them, Vilma’s personality traits became very apparent. “I used to take the little ones by the hand and take them to the seaside, while the others used to run cross-country. One day, a group of eight people were running. Vilma comes running, and then the first boy appears ten minutes later. She tried to be better than the others everywhere, and became such,” he says.

A Breakthrough Was Needed

However, despite her leadership qualities, she also had some very difficult moments while learning to play water polo.

“Boys were difficult. They didn’t accept me into the team because I was a girl. They simply did everything to keep me out of the team: they tried to drown me in the pool, they beat me… That’s the sport of water polo ‒ you swim up to a person and you can start wrestling,” speaks Vilma Juchnevičiūtė frankly.

A breakthrough was needed so that the boys change their attitude. It happened when Vilma did well at a match and their team became champions.

“I scored many goals during that match and they started believing that I could play as well as them. And I started believing it myself too. Until then, I had fought with them to stay in the sport,” Vilma admits.

According to the girl, she had to be extremely strong, determined and stubborn to survive among the boys. She had to leave their insults behind. Of course, her parents and coach always supported her, constantly encouraged her to continue her sport activities.

“I had to make a lot of effort to compete against them. My brother was also on the boys’ side, and I was like a hermit. After that breakthrough, we all started to get along very well. My brother started supporting me. Something had to happen to change their logic, their thinking, to make them see that a girl can also demonstrate something,” says Vilma.

However, shortly after this event, at the age of 12, she switched to another sport. Today, she trains young athletes in modern pentathlon, the sport she switched to back then.

Looking at his former student, Jonas Čirūnas is proud of her today: “I think she has taken everything from me and has already exceeded me ‒ she does much more than me and I don’t know what else she will come up with. She still has everything ahead of her.”

Vilma says she grew up with sport, and the examples she sees around her are inspiring and shape a person as an individual. She admits that she herself has a different attitude towards her students ‒ the attitude that she took over from her coach J.Čirūnas.

“We do not limit ourselves with training excercises, we also go to competitions, camps and additional educational activities as much as we can,” she says.

She always remembers her coach’s advice to be not only a good athlete, but also a good person: responsible, caring for teammates, helpful.

“Being a coach requires a vocation, one has to love children, to get along with them, to comfort them, to talk to them when they need it. After all, every child is different. You have to work hard to build a relationship with them. You may use one technique with one child that may not be suitable for another. Every child is very good experience for the coach, you learn a lot from them,” says Vilma.

As a modern pentathlon coach, she can also teach some swimming.

“Swimming has many advantages. I think every child should get at least the basics of swimming from an early age. It is important for everyone’s future, not only athletes have to know how to swim, but rather everyone, as it is helpful while at the lake, by the sea. You have to have the basics of swimming, to have to have no fear of water. Swimming can help you relax your mind and improve your heart activity,” Vilma says.

She is still amazed at how Jonas Čirūnas manages to maintain a wonderful relationship with all his students over the years. She would like to unravel the mystery of this long-lasting bond herself.

“The coach keeps a great relationship with many of his athletes. When a child leaves my group and chooses a different sport, it is very difficult to keep a relationship with them. Of course, the coach has to be very willing and the athlete’s parents have to be involved. It’s a lot of work on both sides and a lot of willingness,” Vilma is convinced.

Jonas Čirūnas confirms that today he is in touch with almost all of his former students in one way or another.

“All students I have trained have achieved some results. People became high officials, managers. They are all grateful to the coach. The coach only educates, gives them a start, and later they make their own future themselves. I can tell you about all of them,” says Čirūnas, whose greatest gift is the fact that he has kept a relationship with many of his former students to this day.