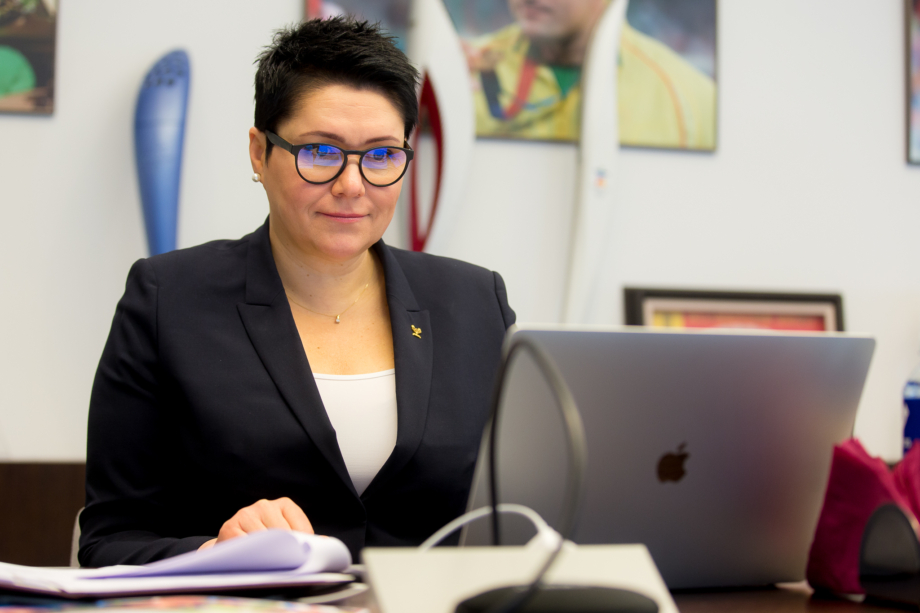 On Wednesday a regular session of the General Assembly of the National Olympic Committee of Lithuania took place. For the first time members of the LNOC convened and voted remotely.

The event was hosted on the Lumi platform. This service is provided by the Belgian company to many international sports federations. It was via this channel that last year’s General Assembly of the European Olympic Committees (EOC) took place.

“Last year was challenging. I am happy to note that, regardless of the difficulties, we have managed to convene for our session as scheduled. Last year’s pandemic has disrupted many of our plans. We hope that this year our activities and projects are going to take place as planned, although nobody is now protected from changes beyond our control,” said Olympic champion, member of the International Olympic Committee (IOC) and President of the LNOC Daina Gudzinevičiūtė.

57 Out Of 67 LNOC Members Participated In The Virtual Session.

During the presentation of 2020 LNOC activities, Daina Gudzinevičiūtė highlighted a significant increase in the number of LNOC Olympic scholarships. Last year Olympic scholarships were granted to 107 Olympic team candidates, which is an increase by 18 in comparison to 2019. Following the postponement of the Tokyo Olympic Games due to the epidemiological situation last year, one Olympic event took place – the Lausanne Youth Olympic Games, where ice hockey player Arturas Seniuta won the bronze medal.

Although many last year’s events had to be moved into the virtual space, this has not reduced their popularity. The virtual Lithuanian Olympic Mile Run brought together Lithuanians from over 31 countries across all the continents, while the traditional Sports Film Festival inspired and cheered up over 8 thousand of households on dark autumn nights. Last year the traditional LTeam award ceremony was replaced by the documentary 2020. The Flight has been Cancelled, depicting the exceptional year experienced by Olympic athletes.

Chairman of the LNOC Revision Commission Algimantas Blažys briefed on the Commission’s activities and performance. The Commission checked the key financial indicators of the LNOC and found no violations. The opinion of the Revision Commission’s Chairman was also upheld by Artūras Štura, representative of PricewaterhouseCoopers which is the LNOC’s auditing company. Artūras Štura noted that the financial statements presented a true and correct picture. The auditor had no further comments or observations.

The LNOC’s Treasurer Darius Čerka made a presentation of 2020 LNOC’s budgetary performance and the LNOC’ draft budget for 2021. Last year the LNOC’s income amounted to EUR 11 mln. 26 thousand. Even though Olifėja UAB generated only 95 percent of the planned income, the total amount of income was higher than planned by EUR 156 100. This achievement is the result of winning funding for international projects.

The Organisation’s expenses in 2020 amounted to EUR 10 mln. 60 thousand, which is EUR 2.5 mln. less than initially planned. The main reason for that was the pandemic and cancelled or fewer events and projects.

According to the plan, the LNOC’s budget in 2021 shall reach EUR 12 mln. 519 thousand, of which EUR 9 mln. 640 thousand will be earmarked for funding the Olympic sports. Moreover, the number of Olympic Education and Olympic Solidarity projects is expected to increase. LNOC’s President made a presentation of the IOC Olympic Agenda 2020+5, which includes revised IOC recommendations.