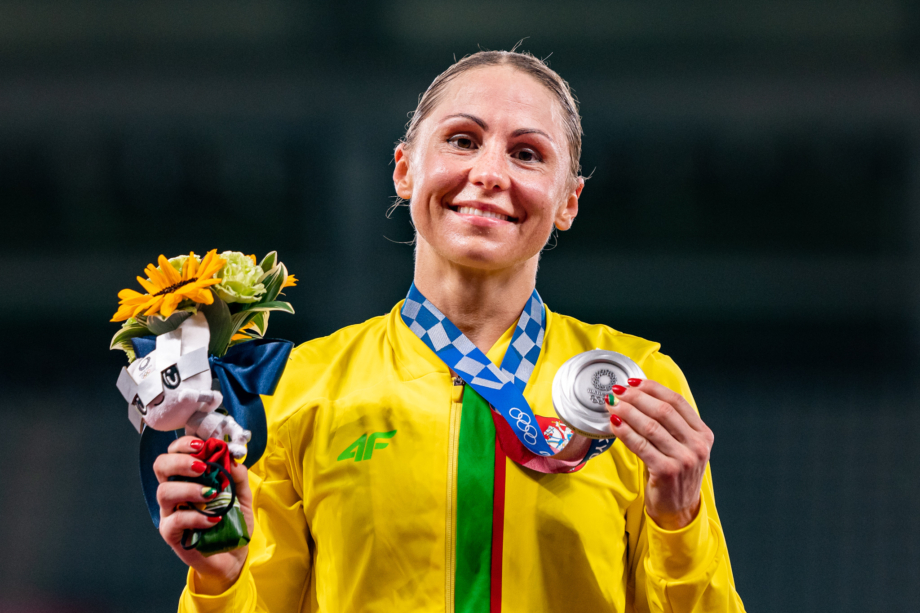 London Olympic champion Laura Asadauskaitė-Zadneprovskienė has added a silver medal of the Tokyo Olympics to her trophy collection. She finished second in the modern pentathlon, although she was 13th before the last event. Gintarė Venčkauskaitė crossed the finish line seventh.

This is the first medal for Lithuania at the Tokyo Olympics.

In the decisive event ‒ combined running and shooting ‒ Laura Asadauskaitė-Zadneprovskienė set off on the track 52 sec. after the start of Ulijana Batashova from the Olympic Committee of Russia, who was taking the lead at that moment, while Gintarė Venčkauskaitė was in 24th place and started running 1 min. 13 sec. after the Russian athlete’s start.

However later the Lithuanians started overtaking one rival after another. Laura Asadauskaitė-Zadneprovskienė was not able to catch up with only the Brit Kate French, who became champion, and was left behind her by 15 sec. The bronze medal went to Sarolta Kovacs from Hungary. The Lithuanian pentathlete beat her by 2 sec. Gintarė Venčkauskaitė came 42 sec. later than the champion.

Laura Asadauskaitė-Zadneprovskienė, who completed the running and shooting events in 11 min. 38.37 sec., improved her Olympic record for the combined event achieved in Rio de Janeiro in 2016 (12 min. 1.01 sec.). Kate French has now become the Olympic record winner, having scored highest in the history of the Games by collecting 1385 points. The vice-champion has 1,370 points in her account, while Gintarė Venčkauskaitė has collected 1,343 points. Laura Asadauskaitė-Zadneprovskienė has held the world record of 1417 points since 2016.

She was not prevented from winning silver neither by having broken a rib a month ago, nor by a 10-second penalty for running out on the track too early in the last race.

“A month ago, I fell with my horse and broke a rib. I missed the European Championship because of that. But despite everything I kept training and believed that I was in good shape and that everything would be fine.

On the first day, I did not feel I did well in fencing, I had planned to win more victories. So I thought that maybe it was just my fate and maybe there would be another time. However, I managed to do very well in other events. And it all ended splendidly. I am delighted that I did a clean ride in the equestrian event, while in the last event of running, where I am strongest, I did my best and won the medal which not only myself but all Lithuania had been expecting. This is the medal of the whole Lithuania. I am so delighted to bring it to Lithuania,” said the Tokyo Olympic vice-champion after the competition.

Before the third shooting, the referees applied a penalty of 10-seconds delay to the Lithuanian for starting too early. “Then I thought that I might be unable to win a medal. But when I turned around, I saw the competitors getting closer. I dashed forward as fast as I could. And with 300 metres to go, I realised I was going to make it. I had a lot of faith that I would get the medal, won by all of Lithuania. And that I would not let it slip my fingers for the benefit of others,” Laura Asadauskaitė-Zadneprovskienė recalled the moments.

“I lost those few points in fencing which were so necessary. On the other hand, if I had done better in fencing, I might have been given a horse that I would not have had a chance to ride with previously. You can count as much as you want, but you must enjoy what you have now. I am delighted with the result. Maybe I didn’t achieve 100% of what I had planned, but I am delighted to be among the top ten,” Venčkauskaitė said after the finish. This is her second Olympic Games ‒ she finished 12th in London 2012.

After an unsuccessful first day, when Laura Asdauskaitė-Zadneprovskienė remained 25th and Gintarė Venčkauskaitė 34th in the fencing event, the Lithuanians’ hopes lit up again in the penultimate event ‒ the equestrian event. In this event, only the representatives of our country managed to complete the ride without any mistakes and scored 300 points each.

In the overall standings, Laura Asadauskaite-Zadneprovskiene, having collected 466 points, dropped from 25th place in the main fencing event yesterday to 27th place, while Gintarė Venčkauskaitė, having 446 points, moved from 34th to 33rd place. The German Annika Schleu (551 points) has retained the first place.

Shortly after the swimming event, an additional fencing round was held. Here, the athletes occupying the last two places compete first. The winner moves on to face the higher-ranked competitor, therefore the last one to withstand these fights has to face the leader of the overall standings. Only one point is awarded to the winner for a victory.

In the additional fencing phase, Laura Asadauskaitė-Zadneprovskienė added two additional points to her account, while Gintarė Venčkauskaitė added one. Their positions did not change.

The equestrian event consists of 12 obstacles and 15 jumps. Each athlete has 300 points before the ride. This is the number of points they can earn if they do not drop any of the obstacles and do not exceed the time limit. 7 points are deducted for each obstacle dropped, minus 10 points for stopping, minus 1 point for each second over the riding time limit. If a stubborn horse does not jump over the obstacle at all or drops the rider, all points may be lost whatsoever. That is the end of the multi-discipline competition.

Gintarė Venčkauskaitė and her horse Farome started fourth, by which time two athletes had already lost control of their horses and withdrawn from the competition. However, the Lithuanian completed the whole ride without any mistakes and earned the maximum number of points ‒ 300.

By the drawing of lots, Laura Asadauskaitė-Zadenprovskienė, the London 2012 Olympic champion, had to ride the horse named Jhon. This horse obeyed the Lithuanian athlete as well ‒ they successfully overcame all obstacles and secured 300 points. No more athletes were able to keep the maximum number of points.

Saint Boy was the hardest horse to control. He was the cause of an early finish of the Olympic Games for both the Olympic record holder Gulnaz Gubaidulina and the competition leader Anika Schleu.

The decisive combined running and shooting event started at 13.45 Lithuanian time. Before the combined event, all points are converted into seconds. The leader of the race starts first and the others start at the intervals equal to the number of seconds whereby they lack behind the leader. The athletes have to complete 4 laps of 800 m and shoot 4 times with a laser pistol at the shooting range to “extinguish” as quickly as possible five target bulbs each. Even if an athlete does not hit all the targets, they can continue running after 50 seconds.