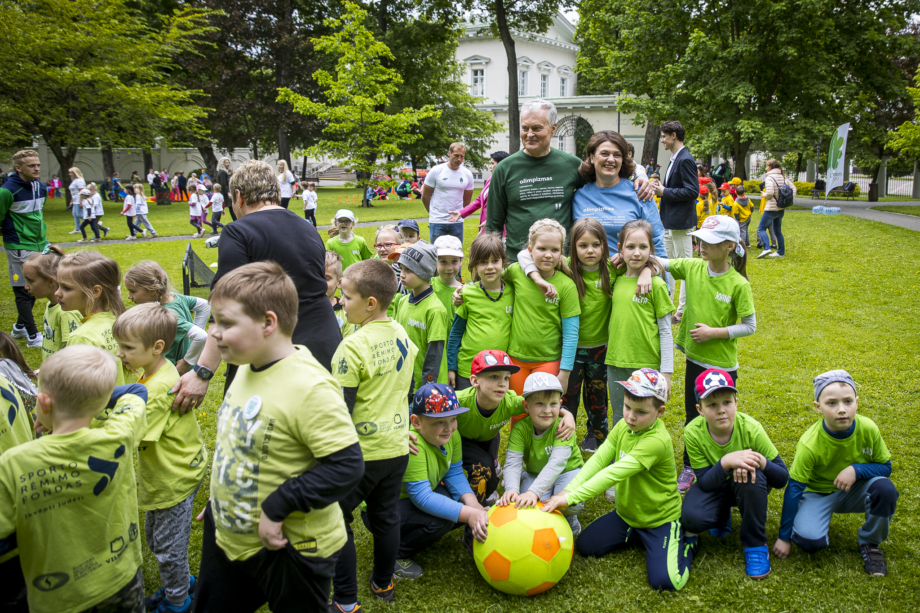 First Lady of Lithuania, Diana Nausėdienė and the National Olympic Committee of Lithuania (LNOC) organised a festivity in the courtyard of the President’s Office to mark Children’s Day.

President of the Republic of Lithuania Gitanas Nausėda, First Lady Diana Nausėdienė, Olympic champion and LNOC President Daina Gudzinevičiūtė and Olympic vice-champion rower Mindaugas Griškonis greeted the participants of the festivity and joined them in the activities.

“I am proud that the Lithuanian Children Games project, which has been successfully running for eight years and was initiated by the National Olympic Committee of Lithuania, has reached the courtyard of the Lithuanian President’s Office.

Participants gathered for a joint exercise session, after which the teams were invited to 13 different entertainment and sports activities. The activities included a special exercise prepared by a physiotherapist, as well as activities to promote healthy eating and lifestyle.

“For adults and educators, this day is a reminder that children are the foundation of our tomorrow determining the future of our country and society. Only happy and healthy people can build a strong and competitive country,” said the First Lady.

“Physical activity not only helps children to develop their bodies, to learn determination and teamwork, but also brings them lots of joy. Today, hundreds of children from different educational institutions played together, interacted and shared their positivity and good mood with all of us.

We are grateful to Ms Diana for her initiative, support and encouragement in talking about the importance of physical literacy for a healthier society. The attention of heads of state is particularly important for educators, who inspire children to move and play sport through their hard work and by their example.

I hope that this year’s festivity, which was held for the first time, will become a beautiful tradition,” Daina Gudzinevičiūtė said with delight.

Symbolic awards were handed out to culminate the festivity, where all participants were declared winners and received medals. After the awards, the guests were invited to a picnic on the courtyard lawn of the President’s Office.

First Lady of the country Mrs Nausėdienė actively supports the LNOC’s Olympic education projects, she is the patron of the projects Lithuanian Children Games and Olympic Month, and speaks about the importance of physical literacy in Lithuania.