#HeForShe: Love for Football and the Value of Equality in the Family of a Lithuanian and an American 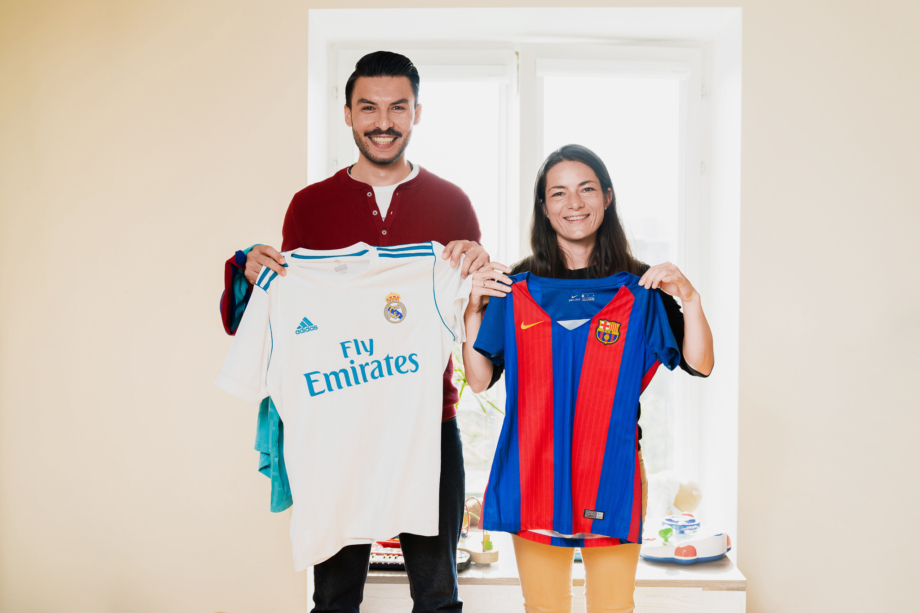 “If boys can play football, why can’t girls do the same?” Heraclio Ulises Perezas, an American living in Lithuania, poses a rhetorical question. Four years ago, the man moved to Lithuania to be with his beloved Justina Lavrenovaitė-Perez, a football referee and coach. Today, the couple coaches girls to play football, and they create their personal lives based on their own rules.

“My favourite team is “Rea”, i.e. “Barcelona,” Heraclio corrects himself quickly, but this was enough for his wife to mock at him immediately. “I knew that you are a “Real” fan deep in your heart. You’ve betrayed yourself!” she laughed.

The encounter between the fiercest rivals “El Clasico” is a big festivity in the couple’s home, although both of them support different teams. Justina’s favourite is the royal “Real” club, while the American is the Catalonia team’s fan.

“Emotions are abundant when watching a football match. It even happed once that a neighbour came to ask us to stop shouting,” Heraclio Ulises Perez laughed while describing the incident.

“Now we behave quieter while watching matches, we discuss a lot about players or referees’ decisions, we analyse them. We also make bets: the one whose team loses buys the winner the T-shirt of the team of winner’s choice. Once, after an “El Clasico”, we put on the T-shirts of “Real” and “Barcelona” and went out to town. People even stopped us asking to pose for a photo with them,” Justina remembers.

The couple’s story is the fourth part of the “HeForShe” campaign initiated by the Lithuanian National Olympic Committee (LNOC). The objective of this United Nations project is to invite men to express their support for women and, together with them, actively aspire for equal gender opportunities, to change stereotypes, and be a united and visible driving force of change.

A Trip to Test Their Relationship

Heraclio’s name can rarely be heard at the family’s home. The name of Greek origin was a pronunciation challenge for Americans, therefore the man was called “Rock” while still staying in the USA, and thus he introduces himself as Rokas in Lithuania.

The way how Justina and Rokas met makes a real love story of 21st century. A common acquaintance showed Justina’s picture to the American, and in no time, he was writing his first message to her on the social network.

“I was attracted by seeing most of her pictures with her holding a football or being at a football pitch. I am a great lover of football myself; I have been playing football for many years, coaching kids, therefore I immediately realised that we have so many things in common,” he said.

After the exchange of emails for over six months, the couple finally met in Lithuania in late summer. For their first date, Justina invited her future husband nowhere else but the Lithuanian A league football match in Vilnius.

Afterwards, the couple’s story developed with the speed of light. Together with friends, they went on a trip across Europe; the American later returned to the USA for some time, however it was as early as the next spring that the friendship culminated in the wedding.

“Even when communicating via the internet we knew that the meeting will decide everything – we will either feel that we fit each other, or not. The saying “you need to set out on a journey with the person you want to know better” must really be true. It was namely during our trip across Europe that we realised that this relationship will no way end soon,” Justina Lavrenovaitė-Perez said.

Having just started to plan the family, they decided that they would equally share both household work and child care. Therefore, when our son Milan Marius was born, Justina was the first to take the child care leave, and Rokas took over in a year.

“My parents are very traditionally-minded Mexicans, therefore when I grew up, my mom took care of the home, while dad tried to earn the financial welfare. Back then, I felt that I missed dad’s attention. Therefore, I decided at an early age that when I have my own kids, I would give them more attention and would get involved as much as their mom.

We talk a lot with Justina, discuss things, make our own rules. We are both parents of our child, and for that reason, I believe, we should also raise him together. Therefore, when Justina was already able to return to work, I took over the diaper changing, feeding and household chores.

I believe this is only natural: the child gets attention from both parents, the family dynamics becomes better, and the cares and worries do not have to be borne by only one individual.

“When we just met and started creating our shared routine, we shared all the work equally. The value of equality matters a lot to Rokas. Even at work. For instance, male and female referee salaries differ, therefore he constantly encourages me to talk about that, to raise this issue, as this is not fair. At first, I tried to justify that by the lesser popularity of female football, however he would insist that it was not the issue. What matters most is the functions you perform, which is the same as that of male referees.

It is extremely pleasant not only to live but also to socialise with the person who supports you in all areas, even where the society has their prejudices. When raising our son, we also consider what is best for him rather than what is “acceptable”. If he likes dancing, why should we take him to football?” Justina wondered.

Trauma Witnessed by the Wife

Rokas encouraged his wife even when Justina was hesitant to accept an offer to be a commentator of the 2018 World Football Championship.

“My first reaction was to decline the offer. Come on, it was the largest football event on the planet, and although Lithuanians are not strong in football, everyone considers themselves an expert.

However, Rokas continued urging me, stating, that this is not only an opportunity for me but also for all women in football. Later, we heard many positive comments,” J. Lavrenovaitė-Perez said.

This woman has been in football almost all her life. Having started playing football at the age of 13, she represented the Lithuanian teams in various age groups, played in the national women’s team, and she is currently a referee with a FIFA category and a couch managing the female football academy Bitės (the Bees). Moreover, she has assembled the female amateur team JL Stars.

She is together with her husband in football. H.U.Perez, who is a licenced coach, also works with “the little bees” and plays in the Vilnius Sunday Football League (the SFL) where Justina is a frequent judge at their matches.

“I was at first asking the organisers whether there was anything wrong in that I work at a match where Rokas is playing. There were no rebukes whatsoever. What matters is remaining impartial and professional. To tell the truth, once it was a very big challenge when I saw Rokas lying and bleeding at the other side of the pitch. During the rivals’ attack, he got his head injured. Although I had the inner instinct to run and make sure everything was all right, I stayed aside,” Justina remembers.

No Genders Differences in Sport

“It was hard when I just started refereeing. I even thought: “Why have all that stress?” But I decided to overcome myself and ultimately, I became so hooked and developed the desire to solve the situation at its best. Now I no longer hear the comments, and since I have played myself, I understand football players’ emotions and do not take them personally.

However, referees get exposed to a large variety of emotions targeted at them. I thought at first that something must have been wrong with me. However, while assisting male referees, I realised that this was not an issue of gender but rather of the profession itself, since male referees hear even more insulting words,” she said.

The woman frequently works in the evenings and during weekends, she travels a lot. And her spouse tries to take over household work at that time and encourages he to continue aspiring for professional goals.

“When we met, I knew how tight her schedule was. I knew about her trips, evening and weekend work. My function is to do all I can so that she can continue successfully doing what she needs to, and enjoy our son and family after work.

I am delighted that the girls’ football situation is improving in Lithuania, the numbers of those willing to join are growing and the girls make really good players. I am delighted to contribute to that and I can see lots of potential.

Sports still encounters gender stereotypes: some sports are considered male sports, while others – female. I don’t think that’s fair. If boys can play football, why can’t girls do the same? If a boy wants to do the ballet, why not? I think everyone has to engage in what they like and be equally remunerated for that,” Heraclio Ulises Perez said.