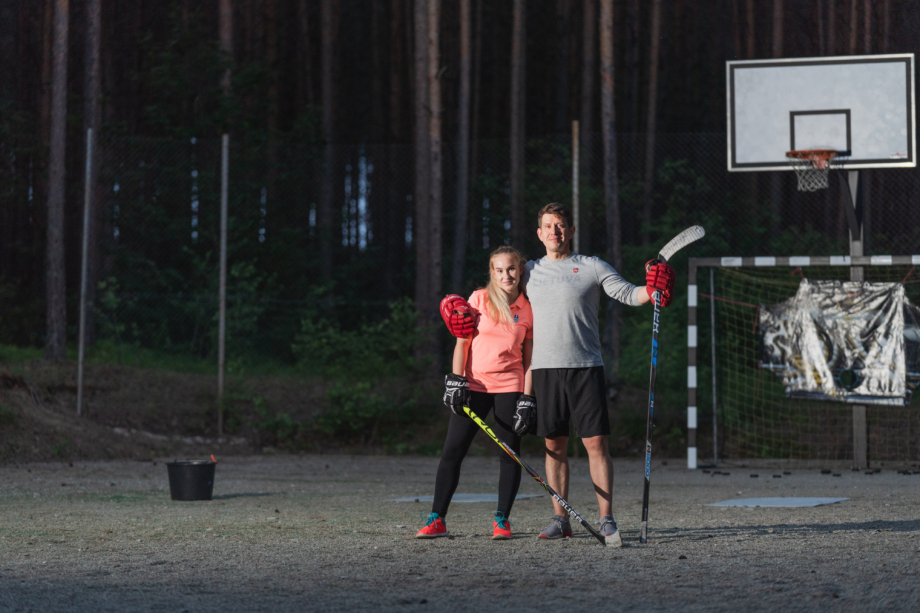 15 years ago, ice hockey player Linas Paražinskas would scan the stands searching for his biggest fan – his daughter Rugilė. The girl never missed her dad’s matches. Today she plays ice hockey herself and tries to discard the myths surrounding women playing ice hockey.

Linas Paražinskas (50) has been around ice hockey for over 4 decades. He had represented Elektrėnai “Energija” for many years, a decade ago founded the hockey school “Griunvaldas” in Kaunas, and today he is the assistant coach of the Lithuanian national women’s hockey team. It is also the team where his daughter Rugilė, 21, plays in the defense position.

“When I first put Rugilė on the ice, she was with her two cousins. One of them teared up not wanting to skate and the other’s stomach started aching from excitement. But Rugilė just skated away. She fell down once, got up on her feet and continued skating.

I remember both the warm feeling and the excitement seeing this. I realized there that something would come out of it. Of course, at the time I couldn’t imagine that she would become a national team player or that we would even have a women’s national team”, recalled L. Paražinskas.

The girl was 7 at the time, the exact same age when Linas himself put on his skates for the first time. Several years later she started playing ice hockey together with boys in her father’s newly founded ice hockey school.

The friendship between R. Paražinskaitė and ice hockey has been going on for more than a decade. It has never been easy and actually almost stopped in Rugilė’s early teens, but even during the most difficult moments Rugilė has always felt her father’s support.

Today, she plays hockey in both men’s amateur and women’s teams. She helps her father train children and is a member of the Lithuanian women’s national ice hockey team that was assembled last year for the first time in history.

The story of Rugilė and Linas Paražinskai marks the third part of the campaign “HeForShe”, initiated by the Lithuanian National Olympic Committee (LNOC). This United Nations project aims at inviting men to actively join women in their fight for gender equality, to discard old stereotypes and to become a united and outstanding force that brings change.

R. Paražinskaitė’s day starts early. In the morning, she rushes to the gym, then attends lectures at the university, and later sets out to children’s training sessions at the ice arena. After work, the girl devotes a few hours to herself, and late in the evening she sits down to complete her university assignments.

Rugilė is studying fashion design and has already created sketches for her first collection of street fashion. She finds a lot of inspiration in ice hockey.

But can’t a woman be versatile? Sport and art give me harmony and complement each other”, said R. Paražinskaitė.

Today, the hockey player speaks with irony about the comments she still receives concerning her choice, but this has not always been the case – more than once she quit training with tears in her eyes.

“I liked ice hockey very much, but it wasn’t easy. I started playing when I was 10 and was the only girl on the team. At the time it was very unusual to see a girl playing hockey. If I failed to do an exercise during a training session, the boys would make fun of me. Sometimes I even would receive suggestions to step away from ice or get accused of simulating because the coach was my dad. It was an incredibly sad experience for a young girl”, recalls the hockey player.

Seeing his daughter’s desire to play and the difficulties she was facing, L. Paražinskas started talking to team members about tolerance and equality in sports.

“After each training session he would gather the whole team round and explain that girls and guys are equal and can play whichever sport they want. We’ve kept this practice up until now. Currently there are four girls in our school. We always try to emphasize that they are equal with the boys and we do not allow any discrimination in the team”,  said Rugilė.

“Why did I start talking about it? Because my own daughter plays ice hockey. I don’t want her to receive insults and leave the ice rink with tears in her eyes. And they do understand. You only need to explain everything properly”, said Linas.

When his daughter started playing ice hockey, Linas also received various and not always positive reactions from other people. But he would always answer to surprise or criticism with the question: why?

“Other parents would say that they really wouldn’t allow their daughters play ice hockey, they’d rather choose dancing for them. But I would never force her if she didn’t want it herself. I saw the spark in her eyes, so why would I suppress her and deny her this opportunity?

I have always asked the rhetorical question: why do we want to separate women from ice hockey? After all, they play football, they box, they can take up any sport they like. Moreover, the rules of women’s ice hockey are slightly different, there are far fewer offenses and roughness, while the equipment protects against serious injuries.

Every September I visit schools and kindergartens and invite children to play ice hockey. There are many girls among those willing to try this sport out, but they are discouraged by teachers, saying that “your parents would not allow this, you are a girl, ice hockey is not for you. But I always ask: why? Let them come and try. Let them play at least for a week or two, if they don’t like it, they can choose another sport. Nobody forces them to do anything. But an opportunity to try must be available to anyone, no matter their gender”, said Linas.

Currently, the Latvian national team ranks 22nd in the world ranking. The Finnish women’s team is 3rd. At the end of last year, for the first time in history, the Lithuanian national women’s hockey team was formed.

The team, led by former German hockey coach Bernd Haake, not only won two victories at the 2020 IIHF Women’s World Championship Division III in Sofia, Bulgaria, but also captured the hearts of the audience by singing their national anthem.

“The organizers of the competition got mixed up and played another anthem before the match instead of ours. The whole team quickly reacted and sang the Lithuanian national anthem themselves. There were many questions about whether it was worth sending our women into the World Championship or whether they would be able to achieve anything there. I myself strongly advised for giving them a chance.

Now this team is our pride. These are our best players, selected from a pretty large pool. They are the most enduring, they fight for victory with fire in their eyes. They don’t enter the rink just to skate, they want to win”, said the team’s assistant coach L. Paražinskas.

Neither when Rugilė watched her dad play many years ago, nor when she first stepped on ice, did L. Paražinskas dream that he would ever work in the headquarters of the coaches of the country’s first national women’s ice hockey team, and that his daughter would defend Lithuania’s honor.

“My heart sings when I see her exiting the rink after doing her best. I feel pride and excitement then. I notice the gradual growth in the popularity of women’s hockey. There are more and more women, and, most importantly, young girls who want to play. That’s why I have no doubt that in the future we will have a good, strong women’s national team that will defend Lithuania’s honor in the strongest tournaments”, said L. Paražinskas with conviction.

Today, looking at his daughter soar on ice, Linas remembers how 15 years ago he would look for Rugilė in the stands.

“When I played, Rugilė would always be in the arena, watching me and waving. As a father, I also always wanted to be at my best and to score a goal. It is nice to feel family support. Now I get to observe my daughter play. My heart rejoices! I believe, this will last for a long time, because she feels pleasure playing ice hockey. All I can do is help, advise and always be by her side”, said L. Paražinskas emotionally.

“Our relationship is very strong. I see my Dad as a role model who helped me find a favorite activity. All women can play ice hockey and I really encourage that. Don’t be shy!

I also want to invite men to support and encourage their female friends, girlfriends, wives, sisters, daughters, or neighbors, just like my father supported and encouraged me. Do not fear injuries – that’s nothing. Bruises heal, and, frankly, injuries can occur in any sport.

Also, don’t pay attention to stereotypes because they are disappearing. When I hear the question of how I can play ice hockey being so short and petite, I answer that it is not size that matters (laughs). Willingness is the most important thing. In ice hockey, it is important to skate, to be agile, and to think”, claimed Rugilė.

HeForShe is a solidarity campaign for the advancement of gender equality, initiated by the United Nations. In 2014, the campaign was launched with a speech by the famous actress Emma Watson about her own path to feminism and her call to involve men and boys in promoting gender equality. During the three first days of the campaign, it was joined by 100 000 men, among the former US President Barrack Obama.