“Equality is a Common Goal for Both Women and Men,” says former President of the Republic of Lithuania Dalia Grybauskaitė 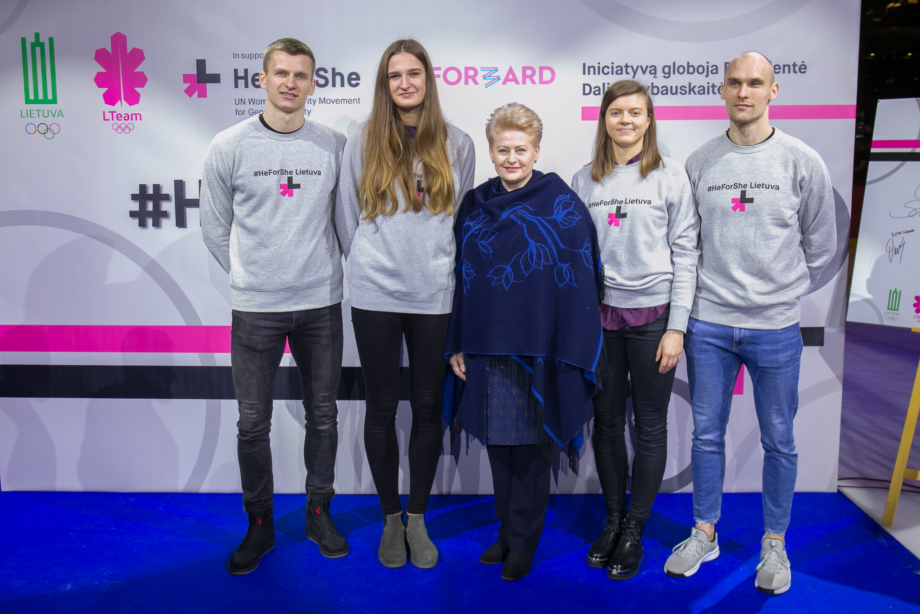 Former President Dalia Grybauskaitė is convinced that “gender equality is one of the most important human rights.” The Patron of the project HeForShe Lietuva spoke in an interview to the magazine Olympic Panorama about the importance of gender equality in society.

HeForShe is a project initiated by the United Nations inviting men to express their support for women and, together with them, actively aspire for equal gender opportunities, change stereotypes, and be a united and visible driving force of change.

In 2014, the campaign was launched with the famous speech by actress Emma Watson at the United Nations headquarters in New York about her way towards feminism and her call to include boys and men in striving for gender equality. Within three days of the campaign, 100 thousand men joined the campaign, including the former US President Barack Obama.

In Lithuania, this project was initiated by the National Olympic Committee of Lithuania, with the former President Grybauskaitė becoming its Patron.

Five touching and open stories presented in the course of this initiative have not only revealed the problematics of gender equality in sport but have also been served as a call to support women’s ambition to seek for career heights in sport.

“Why is it important for men to get involved in the movement for equal rights?” Olympic Panorama asked Ms. Grybauskaitė.

“Because we cannot be indifferent towards what kind of world we live in. This applies to both women and men. The project HeForShe of the National Olympic Committee of Lithuania, contributing to the movement initiated by the United Nations, has been one of the more delightful signs this year. The LNOC has taken an important initiative to encourage men to get involved in this movement. This creates positive change, removes miscommunication barriers, encourages more support in families and teams and reveals the possibilities of womens’ self-realization.”

“During the project, we presented various stories from the world of sport. All five heroines admitted to having repeatedly heard in their environment that one or another sport is not meant for women. What do you think about such a stereotypical division by the society of activities into masculine and feminine?”

“Stereotypes are like mould. Step by step, we are trying to overcome the outdated attitudes that have been shaping the distorted perception of the world for centuries, resulting in the stereotype of a weak and vulnerable woman pushed into the background. The stories of the five heroines confirm that it is not easy to break the twisted mirrors and to overcome the stereotypes of gender roles imposed on us, when, as early as in the kindergarten, you witness the effect of the verdict: “No, you are not fit for that, girl.” That is why the phrase we hear in one of the stories touches us so deeply: “We are equal everywhere, even in ordinary things.

For an excessively long time, the struggle for equal rights itself has been only the concern of advanced women. However, equality is a common goal for everyone, both women and men, generating paramount benefits to society and the world at large in all respects.”

“For a long time, politics, like sport, was considered a male activity. Were you exposed to gender-based discrimination during your career in politics?”

“I’ve been asked that many times. I have always said and will continue saying so that in politics or other activities, including sport, many things depend on your posture, on your personal position, objectives and efforts, on the work your put into it and the knowledge you accumulate. These things do not depend on your official position you occupy or your titles. It is up to us to create our human status as a shield from which discrimination bounces back like a tennis ball. However, life is multi-dimensional, and there are many cases where we have to support each other to become stronger.”

“Do you think our society is becoming more open-minded and is, little by little, shaking off gender stereotypes?”

“Public speaking and discussions about equality, projects like HeForShe testify changes for the better. However, let us stay realistic – there is a long way to go for anyone who understands the importance of eradicating stereotypes. We see how painful the problem of domestic violence is, how relevant it is to reduce the wage gap, how important it is to strengthen women’s sense of self-worth.”

“What can or should each of us do to make the value of gender equality grow and flourish?”

“React when faced with inequality. Mobilize likeminded people. As one of your young heroines said when talking about ice hockey: “Come and try.” It is always worth trying, because taking action is the only way to reach one’s goal. Gender equality is one of the most important human rights.

On a daily basis, we witness women daringly taking up leadership in a huge variety of areas, both in Lithuania and the elsewhere in the world. Let it inspire other women to unleash their power within, and men to support them. HeForShe.”