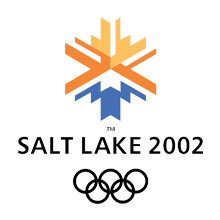 A total of 2399 athletes from 99 countries participated in Salt Lake City Winter Olympics. They competed in 80 events.

even though the athletes themselves and their fans were convinced that the Lithuanian pair deserved a medal. However, judges’ decision pushed the Lithuanians to the 5th place. After the event the leader of the Lithuanian Skating Federation Kazimieras Starkevičius filed a protest with the International Skating Union with the claim that the judges did not take into account the falls of the Italian and the Canadian pairs. However, the protest was rejected, resulting in Italians placing 3rd, the Canadians – 4th, and the Lithuanians – 5th.

Biathlete Diana Rasimovičiūtė participated in her first ever Olympic Games.

During the Opening ceremony, the Lithuanian national flag was carried by skier Ričardas Panavas.

For the first time in the history of the Olympic Games, the IOC’s President Belgian Jacques Rogge stayed in the Olympic village together with athletes.

The women’s bobsleigh event had its debut, and skeleton was reintroduced after a 54-year break.

A controversy due to judges’ bias arose not only in the ice dance event. Two golds were awarded in pairs figure skating. One of the gold medals was awarded to Elena Berezhnaya and Anton Sikharulidze by judges, and, following the voting of the International Olympic Committee (IOC) Executive Board a decision was made to award Jamie Salé and David Pelletier from Canada a second gold medal. The ISU Council admitted that one of the judges may have been biased in judging the performances, which led to the victory of the Russian pair despite a stumble during their performance.

Ole Einar Bjørndalen of Norway won gold in all four men’s events, including the relay.

German Georg Hackl became the first person in Olympic history to earn a medal in the same individual event five times in a row.

China and Australia won their first gold medals in the Winter Olympics.