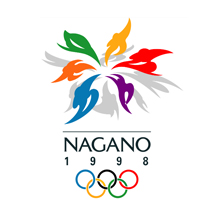 A total of 2176 athletes from 72 countries participated in Nagano Winter Olympics. They competed in 68 events.

In Nagano Lithuania was also represented by 3 skiers, 1 biathlete, and 1 Alpine skier.

Kazimiera Strolienė who had earlier participated in two Olympic Games as a biathlete competed in the skiing event.

During the Opening ceremony, the Lithuanian national flag was carried by skier Ričardas Panavas.

Darius Kasparaitis who played with the Russian team became an Olympic vice champion.

Snowboarding, curling, and women’s ice hockey were introduced to the Olympic programme. For the first time, professional players from the National Hockey League (NHL) were allowed to participate.

Azerbaijan, Kenya, Former Yugoslav Republic of Macedonia, Uruguay and Venezuela took part in the Olympic Winter Games for the first time. Iran returned to the Winter Olympics after a 22-year break.

Tara Lipinski of the US won the women’s individual figure skating event and became the youngest female champion of the Olympic Winter Games at the age of 15 years and 255 days.