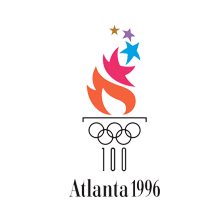 A total of 10 318 athletes from 197 countries participated in Atlanta 1996 Summer Olympics. For the first time in history, all recognized National Olympic Committees were represented at the Games.

The Games’ cauldron was lit by sporting legend Muhammad Ali and the athletes competed in 271 events.

Like in Barcelona 1992, during the Opening ceremony the Lithuanian national flag was carried by swimmer Raimondas Mažuolis.

Atlanta 1996 Summer Olympics were marked by a tragedy when on July 27 a bomb exploded in Atlanta’s Centennial Olympic Park. The explosion killed 2 and injured 111 people.

24 countries made their Summer Olympic debut.

American Michael Johnson became the first man in the Olympic history to win both the 200 m and 400 m running events.