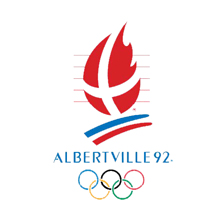 A total of 1801 athletes from 64 countries participated in Albertville 1992 Winter Olympics and competed in 57 events of 12 disciplines of 6 sports.

These were the last Winter Olympics to be held the same year as the Summer Olympics.

To prepare for the Games in 90 days –  that was the task undertaken by Lithuanian athletes and sports organizers after receiving the recognition by the IOC and an invitation to participate in the 1992 Winter Olympics.

“The state was making its first steps, Lithuanian passports were also still in the process of being printed. The first Lithuanian passport with a numeric code was issued to the Olympic champion Vida Vencienė. We really wanted to travel with Lithuanian passports, and thus the state did everything in its power to delegate us as representatives of an independent country”, said one of the main initiators of the LNOC’s restoration Artūras Poviliūnas.

When both initiating the restoration of the LNOC and addressing Lithuanian athletes with a plea to stop participating in Soviet championships, the proponents for the LNOC’s restoration did not expect that the waiting for Lithuania’s return to the Olympic family would take so long. The IOC’s leaders became more favorable only before the 1991 Putsch in Moscow. Therefore, when on February 8, 1992, the tiny delegation of Lithuania consisting of only 6 athletes, their coaches, and officials entered the Olympic stadium and was greeted by a standing ovation, tears of pride and joy could be seen on many faces both in Albertville and Lithuania.

Returning to the Olympic arenas after a 64-year break, Lithuania was represented in Albertville by skiers Vida Vencienė and Ričardas Panavas, biathletes Kazimiera Strolienė and Gintaras Jasinskas, and ice dance pair Margarita Drobiazko and Povilas Vanagas.

Ice dancers completed their debut by placing 16th among 19 pairs of dancers.

19-year old ice hockey player Darius Kasparaitis became an Olympic champion together with the Unified team composed of players from former Soviet countries. This team played under the Olympic flag.

Croatia and Slovenia participated for the first time as independent nations. Lithuania, Latvia, and Estonia returned to the Olympic family.