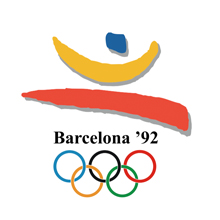 A total of 9356 athletes from 169 countries participated in Barcelona 1992 Summer Olympics and competed in 257 events.

Before leaving for Barcelona, the Lithuanian basketball team had to overcome the barrier of selection competitions. They won all the 11 games played. During the Olympic Games our team beat the Unified team with the score of 82:78 and won bronze.

Among top 8 also were boxers Vitalijus Karpačiausias and Gitas Juškevičius both of whom placed 5th.

Nijolė Medvedeva was 4th in the long jump event. However, her sample tested positive for prohibited substances, resulting in the athlete’s disqualification for doping for 4 years.

Baseball, badminton and women’s judo officially became part of the Olympic program. Slalom canoeing returned to the Games after a 20-year absence.

For the first time men’s basketball officially became open to all professionals and the US assembled a legendary “Dream Team” of the best NBA superstars. This team dominated the event and assuredly won gold.