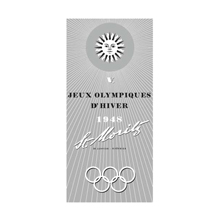 These Games were the first after a 12-year break since the last Winter Olympics due to the World War II. 669 athletes from 28 countries participated and competed in 22 events.

The 1940 Winter Olympics were to be hosted by Sapporo, however, the Japanese decided to decline the invitation to host the Games because of high costs. The IOC offered the right to host the Games to Garmisch-Partenkirchen, which would have made it the first city to host consecutive Games. However, following Germany’s invasion to Poland on September 1, 1939, Germany withdrew its bid to host the Games. After that, Finland offered to host the Games, but the Soviet Union’s invasion of Finland ended all hope of an Olympic Games in 1940. In 1939 a decision was made to award the 1944 Winter Olympics to Cortina d’Ampezz, Italy. Alas, the war continued, and the Olympic Games did not take place again.

After the war, the Games of Renewal were awarded to Switzerland which did not take part in the World War II.

Together with usual winter sports, two demonstration sports events were held at the St. Moritz Games – military patrol, which was later renamed biathlon, and winter pentathlon.