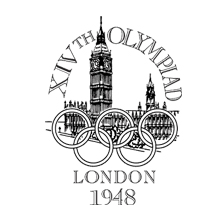 Following a 12-year break, the Summer Olympics were attended by 4104 athletes from 59 countries. They competed in 136 events.

After hosting the 1908 Summer Olympics, London had again won the right to organize the Games in 1944, however, they did not take place due to World War II.

In 1948, there still was shortage of food in Great Britain, therefore delegations had to bring their own. For this reason the Games came to be known as the Austerity Games.

Germany and Japan, both under Allied military occupations, did not manage to restore their national Olympic committees, therefore they were not invited to participate in the Games. The Soviet Union was invited but chose not to send any athletes, sending observers instead.

For the first time blocks were introduced for athletes in Olympic sprint races.

Also, for the first time at the Olympics swimming events were held undercover.