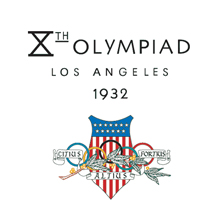 A total of 1334 athletes from 37 countries participated in Los Angeles 1932 Summer Olympics. They competed in 117 events.

Although the heads of the Lithuanian Sports League responded to the USA Olympic Committee’s invitations to participate in the 1932 Winter Olympics in Lake Placid and 1932 Summer Olympics in Los Angeles, due to physical education reform and financial hardship Lithuanian athletes were unable to travel to these distant US cities.

The Los Angeles Olympic Games were held during the worldwide economic crisis known as the Great Depression, therefore the number of participants was the smallest since St Louis 1904 Summer Olympics.

Football was completely removed from the Games programme.

A victory podium was used for the first time for awarding medalists while raising their national flags.